Just as most of us don’t like clichés and formulas in movies that we have pre-high expectations of; as sports writers when we have total control of our reporting situation neither do we want to engage in the same behavior we so often see in the film industry.

The challenge is that it’s hard not to.

In many ways constructing an article is like building a house or working in a factory. Certain production elements need to be present. A house always needs a foundation, strong framing, windows and a roof; a story needs an introduction, transition sentences, a body that supports your point and a conclusion that sometimes calls for action.

Female Competition International is not a hard news source but we are also not a purely fluff manufacturer either. When it comes to extremely good female wrestlers or others at the opposite end of the spectrum who are not, the structure of the article takes on a straightforward simplicity based upon the competitor’s records.

Indra of Doom Maidens and London Wrestling Studios is not an easy formula fit. 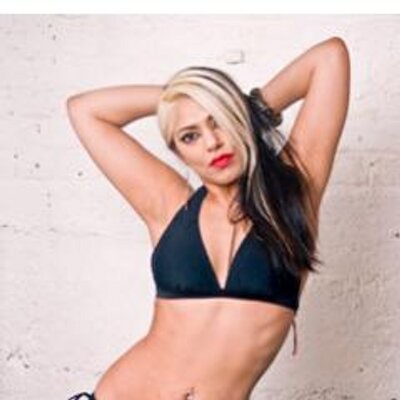 Based upon her record we cannot say that she is really good or really bad.

Assessing her behavior during matches we cannot say whether she is ascending or otherwise.

We will stay with the FCI prime directive which is to promote the interests of the female wrestling industry and the competitors as well.

Regarding Indra, this is the easy part.

First of all, she is very feminine and extremely gorgeous. Her wrestling skills are solid and she has a certain unique charisma. Her relationships with both doommaidens.com in New York and London Wrestling Studios in England are to be admired. Our research shows that she has been traveling back and forth across the pond at least since 2011.

The compliments regarding this beauty flow like the Atlantic on a calm sunny day. Here is what doommaidens.com had to say. “Indra is a tough and cheeky wrestler from the London Wrestling Studio. She’s fun, clever, and strong for her size. And she’s got a nasty streak!

In addition to wrestling, Indra has earned a brown belt in Karate and is a trained kickboxer. She’s best known for her intense leg strength and scissor sessions. She also has experience with Domme activities and can blend classic domination in with her wrestling sessions.”

Here is what a very happy customer had to say about a session experience with our adventurous princess. “Indra is without doubt one of the best kept secrets at LWS. Had a one hour session with her today, and was totally blown away with Indra’s level of fitness throughout the match.

Indra’s head scissors are deadly and I can say without doubt, if she has the hold locked on you will certainly have to tap-out at some point or face knockout.

Also as you may have already gathered Indra is no shrinking violet, expect to feel like a shadow of your former self as you are verbally emasculated by Indra’s cutting taunts. Indra’s defense has massively improved since I saw her compete in the mixed matches nearly a year ago. It is evident her BJJ training in the Big Apple has made her a very tricky opponent indeed. It was a rare defeat for me with Indra winning one to nil.”

Based upon what I’ve read, if I ever have the opportunity to visit VeVe Lane’s New York company; Indra is someone I’d love to meet and session with. Truly.

Opportunity though is the operative word here and as we examine Indra’s competitive wrestling in terms of her focus, questions arise.

Let’s detach this from Indra.

Is the window of opportunity irrelevant in women’s submission wrestling?

For those of us have played or coached sports at a high level, we know the window of opportunity is everything. They open for so long and if you don’t furiously climb through you and the others you have bled, fought and teamed with have to live with the gathering storm clouds swelling with tears of sadness.

Finally it rains. Even during the longest drought, it eventually does.

Sometimes it flows at the strangest times and places. No matter how you try to shove it back to the dark recesses of your mind there is always some reminder that pops up out of nowhere to push the elevator back up to the top floor.

Trust me; it’s anything but a game.

Friendships often end. Not because of anything wrongly said or done. It’s just that you remind each other of severe failure.

On the other hand, when goals are surpassed you are friends for life.

I’m from Texas. I love the Dallas Cowboys. When I watch these current Cowboys with the superbly talented Tony Romo as their leader I sense the window is closing. This writing is as of October 25, 2014 and Dallas is off to a sizzling 6-1 start. As thrilled as I am for them there is a part of me that is terrified that if they don’t make a strong run and at least get to the Super Bowl this year, during Tony Romo’s reign, they most likely will not.

I hope they do, more for my sake than his.

Given all the records Mr. Romo has broken and the other worldly performances he has dazzled us with, can he honestly say in the privacy of his thoughts that if he doesn’t get to at least one Super Bowl that after he retires he won’t be quietly devastated?

I will be for him and myself.

It’s not that I just want the Dallas Cowboys to win the grand prize. After all of the disappointments I have shared watching the magical QB, I want Tony Romo to win one too.

It will be life affirming.

This is what troubles me about the modern world of women submission wrestlers.

For many there seems to be no concern about their window of opportunity. You’re only young once and when you are young since you’ve never had any experience of being older and broken, it seems like you are bullet proof and will be young forever.

You won’t. It’s real. Everyone gets older and broken. Physically is bad enough.

Spiritually and emotionally are far worse.

It’s less painful though if you have successfully climbed through your categorical closing windows with passion.

I’ve been on both sides and it is so painful when you know you will never get a second chance. In the quiet darkness of your dreams which provides you with the illusion you will, there is still a quiet underlying dread. Even deep in REM, you know it’s a dream and at some point you will wake up to your real life unbearable pain.

Indra has wrestling credentials up the yen yang. She’s a kick boxer and skilled in Karate. Tuff stuff for sure. The problem for me is that I virtually never see any of it on the competitive mats.

I’ve seen Indra wrestle Laken, Athena, Jennie Vaughn and Justice. The most telling match for me was her struggle with Jennie Vaughn at Doommaiden’s 2013 event. At first it started the way most of Indra’s matches start and end; with a lot of chatter and giggling. At some point it took on a very serious tone for Jennie and she began to punch and woman handled Indra while our sensuous world traveler lay flat on her back.

Simply put, Jennie upped her game while Indra was content to spar. Instead of Indra jabbing, there was more jabbering.

Calm down you plead. So what you say? It’s just for fun right?

Then why in the world are you reading a thousand word article?

Don’t get me wrong. For me, Indra is not Tony Romo or Texas A&M disappointing. Hey she’s not even “fantasy session wrestler girlie chick; I only do this fetish for the money” disappointing. I’ve never personally met her so this isn’t personal.

This is my baggage. Not hers.

I’ve been in the brutally competitive elite high school sports world where my charge ran in the fiercely challenged men’s 100 meter track and field events and after six years when all the dust had settled he finished as the number one ranked senior in the most populated state in America. The alpha among California’s 2008 most elite race horses. It’s just a game right? How often do I think about what our team did?

Often, even when young, it’s later than you think. It’s not just age that retires you. Competitors get injured. Women get married. The other life calls and the phone won’t stop ringing until it’s answered.

It’s hard to see great talent being………..well you know what I really want to say, but I won’t say it. It violates FCI’s prime directive and we certainly wouldn’t want to do that now would we?

Let’s end this before I stray too far.

Yes, it’s very foggy here in Northern California, but you know what?

Like Mr. Johnny Nash so eloquently expressed; we can see clearly now.

Your window to greatness is closing.