What can you say about one of the greatest female wrestlers who competed with the world’s elite and emerged victorious again and again?

DWW girl Kriszta wrestled in exciting tests of endurance where the outcome was often in doubt. 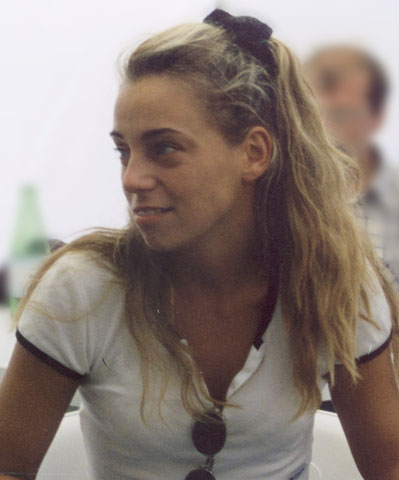 Bond girl and actress celeb Shirley Eaton’s character Jill Masterson was covered in gold from toes to hair in the 1964 James Bond film classic Goldfinger, resulting in her movie death. DWW’s Kriszta was a star wrestler in the late 1990s who also was covered from head to toe with a beautiful golden tan to match her wavy yellow gold hair.

Fortunately for Kriszta, dying from being covered in gold is just a myth.

As a competitor Kriszta certainly won more than she lost in her sun baked career and the most enjoyable facet of watching her compete was that the outcome of her competitive matches, like a solid French thriller is hard to predict.

She would defeat Vera which I pegged Kriszta as the under-dog, then find herself in an endless battle with Timea where I had silently picked her as the front runner, and then lose to Edita when I gave her the edge. She battled so many of the DWW girls on those inside blue mats that blended so well with her golden skin.

“At its best, life is completely unpredictable”.…….Christopher Walken

The unpredictability is what I enjoyed so much about Kriszta.

So many American films, even when well-done are so strongly male character driven that they consume the film in large gulps and swallows. When super stars Tom Cruise, Denzel Washington and Leonardo Di Caprio drive a film it’s as though the director and producer have made a pact that they must always get the beautiful girl, have all the witty lines, explode as the hero or terrify as the villain thus practically every important scene has their fingerprints all over the celluloid canvass.

So many of the French films like The Beat That Skipped My Heart, The Child, The Diving Bell and the Butterfly, Incendies, High Tension, Right Now, Time Out and Mademoiselle Chambon are clearly story driven where fine acting abounds but you get so lost in the story that you can barely remember the actor afterwards. When you see them in a film down the road, mostly you can remember the performer’s face but not their name.

Even the French gems dubbed thrillers where there are strong male leads like Rapt, Paris Countdown, Sleepless Night, The Assault and Point Blank; they have you so shaken by the tale itself it’s impossible to predict it’s outcome.

Unpredictability was the fun of watching the sunny Kriszta shine on the mats.

According to her team DWW site, Kriszta’s occupation is that of a nurse.

The subject of healthcare has become such a major focus of discussion in many countries. Let’s visit Austria where many of the DWW competitors reside and view healthcare there.

We start with Austria’s Federal Ministry of Health which states, “Austria has one of the best health care systems in the world. Our goal is to create transparency, recognize problems and draw up solutions together which give people in Austria the security that they will receive the best possible treatment if they become ill. A particularly important point for me is that health care policy is not just about so-called reparatory medicine, but about promoting and preserving people’s health. Health issues have to be more firmly anchored in our society, and have a presence in schools, companies and local communities.”

The world traveler and great source of information Wikipedia shares, “The nation of Austria has a two-tier health care system in which virtually all individuals receive publicly funded care, but they also have the option to purchase supplementary private health insurance.

Austria’s health care system was given 9th place by the World Health Organization (WHO) in their mid-00s international ranking.

The city of Vienna has been listed as 1st in quality of living (which includes a variety of social services) by the Mercer Consultants.”

“Healthcare should be between the doctor and the patient. And if the doctor says something needs to be done, the government should guarantee it gets paid for”.……..Michael Moore

The site expatarrivals.com expands on the system. “The healthcare system in Austria provides free access to basic healthcare to all citizens and residents of Austria, as well as tourists and those staying in the country on a temporary basis. Basic healthcare in Austria includes treatment in public hospitals, medication, basic dental care and some specialist consultations. For European expatriates there are also reciprocal healthcare agreements in place with other EU member states and those holding a European Health Insurance Card (EHIC) can use it in Austria.

Expats moving to Austria can rest assured knowing that they will be moving to a country with one of the best healthcare systems in Europe.

Like most female wrestlers, Kriszta was a world traveler that competed all over the globe including Europe and The United States. She grappled at small events as well as Jackpin’s classic event in 2000. Her matches were often marked by long close struggles and that comes as no surprise since she listed endurance as one of her strengths.

My perception of her from the eyes of a fan was that she was a DWW team player who was willing to help where needed whether it was monitoring a match or helping a newer girl learn the ropes. One of her famous protégé’s and current star wrestler is Viktoria.

The great American activist Rosa Parks was quoted as saying, “Memories of our lives, of our works and our deeds will continue in others.”

As the years have passed, so many of the girls who wrestled for DWW during the competitive glory days had their unique strengths. Kriszta’s works is now continuing in the works of others through this story. Along with her beauty, she brought a sense of calm to what at times can be a very chaotic sport.

With her golden persona, quiet sweet spirit and superior wrestling skills, Kriszta possessed all the right character moves including the element of surprise.