[intro] What should come first? The manifestation of the personality or the nickname?[/intro]

The site ready.gov/hurricanes states a hurricane is a type of tropical cyclone or severe tropical storm that forms in the southern Atlantic Ocean, Caribbean Sea, Gulf of Mexico, and in the eastern Pacific Ocean. A typical cyclone is accompanied by thunderstorms, and in the Northern Hemisphere, a counterclockwise circulation of winds near the earth’s surface.

When it comes the famous female submission wrestler, Sabrina Stone, otherwise known as Hurricane Havana, this writer would like to go with the personality thing. 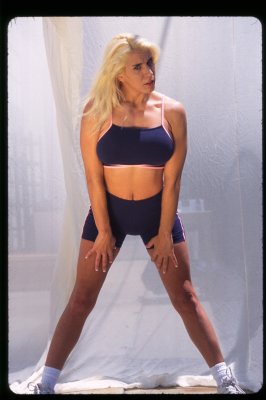 Being a true lover of women’s submission wrestling for decades when I first saw Hurricane compete, I knew she was a star. She has wrestled for endless private wrestling companies around the globe. Her skills are legend. She is famous for something else as well.

During her matches for crying out loud!

There is only one competitor in the women’s submission wrestling world that even has a chance of out talking her and that would be Penny of San Francisco (See FCI Penny Mom Wrestler). During a December 2013 filming someone she was competing against finally asked Penny during the match, “Do you ever shut up?” Penny replied. “Hmmmm, you have to shut me up!”

If Penny and Hurricane Havana ever met it would be a talk fest of massive proportions. A verbal jousting that would make early England proud. An expansive word skyscraper with enough floors that would make Dubai blush.

Hurricane Havanna speaks about her heritage and life on her site hurricanehavana.blogspot.com.

“I was born in the small town of Guanavacoa, Cuba which is very close to Havana. My family was very poor. My mother worked in the sugar cane fields and my father worked in a dairy farm. Life in Cuba was very bad under the Castro regime. All that we had was considered to be the property of the government – even the fruit from the trees we had in our yards.

The Cuban Government would arrest you if you were to eat any of the fruit or use State owned beaches. All these amenities were for the Government and tourists. Food was rationed and we were told what to eat, when to eat it and how much we could eat. We could not wear shoes. If you were to buy shoes, then you were not allowed to buy underwear. The Government regulated every facet of our lives. We didn’t have bathrooms in our houses. We had to use public co-ed bathrooms and showers where several families (men and women together) would use the toilet and shower without any privacy whatsoever.”

Wikipedia shares Cuba, officially the Republic of Cuba is an island country in the Caribbean. The nation of Cuba comprises the main island of Cuba, the Isla de la Juventud, and several archipelagos. Havana is the capital of Cuba and its largest city. The second largest city is Santiago de Cuba. To the north of Cuba lies the United States (150 km or 93 mi away) and the Bahamas are to the northeast, Mexico is to the west (210 km or 130 mi away), the Cayman Islands and Jamaica are to the south, and Haiti and the Dominican Republic are to the southeast.

The island of Cuba was inhabited by numerous Mesoamerican tribes prior to the landing of Italian explorer Christopher Columbus in 1492, who claimed it for the Kingdom of Spain. Cuba remained a colony of Spain until the Spanish–American War of 1898, after which it was briefly administered by the United States until gaining nominal independence in 1902. The fragile republic endured increasingly radical politics and social strife, and despite efforts to strengthen its democratic system, Cuba came under the dictatorship of former president Fulgencio Batista in 1952.

Growing unrest and instability led to Batista’s ousting in January 1959 by the July 26 movement, which afterwards established a new socialist administration under the leadership of Fidel Castro. Since 1965, the country has been governed as a single-party state by the Communist Party.

Hurricane shares more about her life philosophy and work ethic.

“Coming to the United States when I was around six years old was the greatest thing to happen to me at that time. We settled in Miami, Florida as do almost all Cuban immigrants. Florida offered much more to us than Cuba and it was there that we began to settle in as new Resident Aliens. My family stayed in Florida for a few years and then we moved to Southern California where I am residing still.

Life in Southern California was no better than Florida. My family was still very poor and life was generally difficult. There was a time when I was sixteen years old and I had to hold down three jobs to support my large family. One was at a nationally known pizza delivery company; another was at a nationally known hot dog restaurant; and the third was a major super market chain. I worked very hard to survive because that is the way I was brought up. Hard work has always been a way of life for me and I am not afraid of it. I bring that work ethic to my wrestling and modeling career.”

Her wrestling victories are impressive. Her wrestling style is rock solid. Her reputation as a competitor is well and widely respected. Her stats are 5-4, 115 pounds, blonde hair with green eyes.

She concludes, “I am a very dependable, lovable, bubbly woman with a childlike streak in me. I am playful and easy to work with because I have so much to be thankful for. The modeling experience is my greatest dream and I give all my employers their money’s worth not only in my work, but in my dependability and my attitude. I always show up to work. I am almost always on time if not early. I do not use drugs of any kind. I do not smoke and I very rarely drink. I am very much into a healthy lifestyle and work out at the gym regularly for my own good and also to keep myself looking good for my career.”

What is admirable about Ms. Havana is that she is willing to participate in all forms of wrestling including matching up with the lady pros, something we preached about in our original Mission Statement.

Female Competition International, fciwomenswrestling.com wishes there was a women’s submission wrestling Hall Of Fame. Great wrestling skills and extensive victories over strong competitors would be a prerequisite for entry. Something else should be required as well. The ability to sell a match and display charisma is highly desired. Based upon that description, Hurricane Havana would certainly have our vote.

We are glad she came to America as well.