Ina Black is a beautiful Bulgarian powerhouse that wrestles with the heart and skill of a champion. 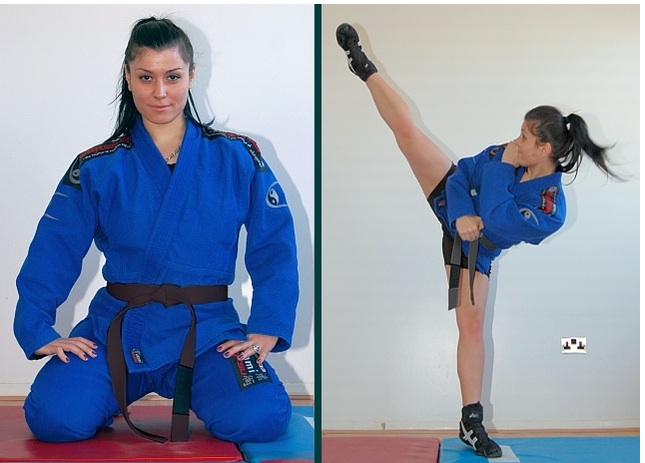 Swelling with confidence, dialed in with determination, packed with energy and confident in Plan A, the female wrestler strides head up towards her match. Upon arrival at the mats, she takes one look across the way and see the stately Ina Black and sighs silently……….

So much for plan A.

Ina Black, a sensuous female powerhouse with a wrestling victory slate as long as the Danube can do that to you.

When watching her wrestle, her technique is sound, her skill level high, and her grit and determination is very apparent. The extra weapon she has that is not hidden, and she doesn’t always have to use it, but she can pull it out whenever she wants, is the ability to overpower virtually anyone at will.

[pullquoteright] “Nearly all men can stand adversity, but if you want to test a man’s character, give him power.”
……………..Abraham Lincoln
[/pullquoteright]

This writer has seen her wrestle for a number of companies and has great admiration for her efforts in that she never mails it in. It’s 100 percent, every time.

Bulgaria is her village and what a fine job the community and the parents who raised her did in terms of empowering her with the skills to succeed.

The excellent travel site Wikitravel initiates, “Bulgaria is a country in the Balkans on the western side of the Black Sea. It is surrounded by Romania to the north, Serbia to the northwest, the Republic of Macedonia to the southwest, Greece to the south, and Turkey to the southeast. Being located close to the Turkish Straits means the key land routes from Europe to Middle East and Asia pass through Bulgaria.

Bulgaria is one of the few exotic nations of Europe, due to the fact that it boasts sublime beaches, lovely churches, winter sport opportunities, to name a few. Although it is not regularly visited compared to other European nations, it is a beautiful place, with a wide range of activities for a traveler to do.

The Bulgarian language is related to Serbian, Russian and other Eastern European languages, but contains many international words. Bulgarians use the Cyrillic alphabet which can make the task of getting around the country somewhat difficult if you aren’t familiar with this alphabet as most signs are written in it. However, getting acquainted with the alphabet isn’t very difficult and may save you a lot of trouble, especially as many common words are homophones of English or French words.

Also, as Bulgarian education emphasizes foreign language studies, especially English language, it wouldn’t be a problem to talk and find information in English in bigger cities. It’s best to turn to the young population for a direction or an advice.”

When Ina describes her combative career you can understand why her ability to over power, out smart and intimidate is mostly par for the course. She states at WB270, “”I’m known as Ina Black with some fantastic grappling skills. I am a recent graduate of The National Sports Academy in Sofia. My specialty is in coaching Sambo, the Russian grappling martial art. I’ve been competing in Judo and Sambo since I was 12, and have been national champion in Sambo no less than seven times – as well as taking third place in the World Championships! I’m also an instructor for Taebo. I speak English and Russian.”

The respected female wrestling site foxy-dolls.com where Ina is featured has this to say; “We believe she does not need a presentation, because she is one of the Top 5 Best Competitive Wrestlers in the heavy weight category.

She is a champion of judo and sambo and for the last 5 years she performs in the world of submission wrestling, gaining wins one after another. Lots of times girls have declined wrestling with her out of fear, but the fact is that she can be very careful and gentle and defeat the opponents without injuring them or threaten their health in any possible way. She loves dominating and showing that she doesn’t fear the heavier opponents.

At the same time she is very funny and friendly person and shows great attitude towards everybody. She loves the sea and lying on the beach. She loves animals, rock music and beer. Her favorite drink is the wine.
Her philosophy is that woman’s strength is in her weakness, but this provokes her to show that she could be as competitive, strong and technical as the guys who she wrestles with.

One of the premiere women’s wrestling groups in England, Monica’s Wrestling Center had this to say as well, “Ina Black is a Bulgarian beauty with some fantastic grappling skills.”

Gentlemen, if you love wrestling a beautiful powerful young woman you can contact wrestlingmonica.com to schedule a session.

Ina has the reputation of being willing to take on any competitor and her glorious list includes matches against the formidable Kassidy, German super star Anna Konda, American champion and sensation Ariel and she is so ambitious she even took on her own sister Lidiya!

Just when you think you have viewed and appreciated all of the current female submission wrestling champions that the world has to offer the rough and tumble wrestling of a super star like Ina Black lets you know your list is woefully incomplete. The scary thing for her opponents is that Ina is a very young woman, loves the sport, is determined to improve and very clearly has not remotely peaked yet.