A HERO NAMED VIVIENNE HAS COME TO THE RESCUE TO HELP END CHILD SLAVERY AND SHE’S ONLY NINE YEARS OLD.

One of the luckiest things that can happen to you in life is, I think, to have a happy childhood…….
Agatha Christie

A stable home with parents who supply a child with an abundance of love, lessons in self-control, increased lanes of communication and plenty of play time is the foundation for an idyllic childhood.

Thebabycenter.com informs us play is crucial for your child’s social, emotional, physical, and cognitive growth. It’s your child’s way of learning about his body and the world, and he’ll use all five senses to do it, especially in the first year.

For millions of children worldwide, slavery is robbing them of their childhood.

Freetheslaves.net educates us that there are more people in slavery today than at any time in human history – 27 million. This growth in the number of slaves is driven by the population explosion, widespread impoverishment of people and their resulting vulnerability, and government corruption so that people are not protected from the violence of enslavement.

Throughout history, slavery has meant the complete and violent control of one person by another, the use of slaves for economic gain, and work for no payment. The one part of slavery that is new is the complete collapse in the price of slaves.

For most of human history slaves were expensive, the average cost being around $40,000 in today’s money. That price has now fallen to an all-time historical low. The average slave costs around $90 today. This dramatic change in the economic equation of slavery means that slaves have stopped being capital purchase items and are now disposable inputs in economic processes.

Their website continues explaining there are slaves in almost every country. The majority of the world’s slaves are in South Asia (India, Pakistan, Bangladesh and Nepal). Many are held in debt bondage slavery, a system in which a person (and often his or her family as well) are held as collateral against a loan. Because they are collateral, their work does not repay the debt but ‘belongs’ to the moneylender. Unable to earn money independently, the family is unable to repay the illegal debt and it is passed down from generation to generation, creating hereditary enslavement. Africa and South America both have large numbers of slaves in some areas, and the recent increase in human trafficking is bringing thousands of slaves to many countries in Europe, North America and Southeast Asia.

The International Labour Organization reports in its most extreme forms, child labor involves children being enslaved, separated from their families, exposed to serious hazards and illnesses and/or left to fend for themselves on the streets of large cities – often at a very early age. Whether or not particular forms of “work” can be called “child labour” depends on the child’s age, the type and hours of work performed, the conditions under which it is performed and the objectives pursued by individual countries. The answer varies from country to country, as well as among sectors within countries.

The Guardian.com supports this disturbing news by adding at the root of all this inaction is a lack of political will to address global slavery. Many governments remain in denial that the problem even exists.

It isn’t only criminals who are profiteering from the trade in human labour. Modern-day slavery is an underground business, intrinsically linked to global supply chains. Individuals and companies are making a huge amount of money out of this business and can make it extremely hard for campaigners and governments to chase the cash back to its true source.

A super heroine is coming to the rescue and it’s a nine year old girl. 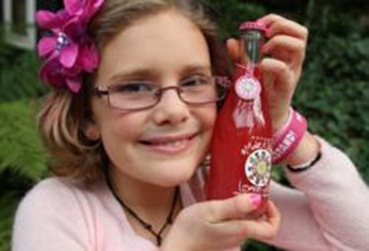 Ms. Vivienne Harr, a 9-year-old from California, celebrated the one-year anniversary of her lemonade stand last month, which she started to help abolish child slavery. On her 365th consecutive day of operations, Vivienne announced that the lemonade stand had now become an official social purpose corporation, according to a Fair Trade USA Press Statement, informs the huffingtonpost.com on July 30, 2013.

The Huffingtonpost continues, her company, Make A Stand Lemon-Aid, will generate its profits using the same model as her curbside stand — the “giveness” model. Her website describes the company as a “giveness” — a business without a price tag for their bottles.

Half of the profits from each bottle sale will benefit antislavery organizations such as, Free the Slaves, UNICEF, and The International Programme on the Elimination of Child Labor — according to the company’s website. Little Miss Lemonade’s project began after she saw photographs of two Nepalese child slaves and immediately felt the need to help them out.

In its first six months, her stand donated over $100,000 to antislavery campaign Not For Sale, according to a press release. But she did not stop there. Six months later, Harr raised enough to launch her new company which distributes its bottled beverages at 70 different West Coast-based retail locations.

Makeastand.com where Ms. Harr’s lemonade is featured lends this perspective. “Make a Stand started not as a product, but as a promise—a promise in the heart of an 8 year-old who set up a lemonade stand every day, rain or shine, to end child slavery. After 365 straight days, Miss Vivienne Harr decided to bottle her “lemon-aid.” It grew into a new way of doing business: A for-profit Social Purpose Company ending child slavery in our lifetime—one bottle at a time. We give half of profits to five carefully-vetted organizations that eradicate child slavery.

A real story, a real brand, a real product. One year ago, then eight year-old Vivienne Harr saw a photo of two boys, roughly her age, with giant rocks strapped to their heads. She learned that they were modern-day slaves. She thought slavery ended with Abraham Lincoln. She was wrong. She decided to do something about it. She set up a local lemonade stand every day to make a stand against child slavery. After 173 straight days, at the age of 8, she reached her goal and donated over $100,000 for Not for Sale (a big check for a little lady!), liberating hundreds of enslaved children in the process. That moment made a movement—and made a company.”

[pullquoteright] I can only say that there is not a man living who wishes more sincerely than I do to see a plan adopted for the abolition of slavery………..
George Washington
[/pullquoteright]

The Guardian.com states legislation is in place to try to curtail modern-day slavery, a multibillion-dollar industry that operates almost entirely by cash and is estimated by the International Labour Organization (ILO) to earn profits of $32bn each year (pdf). However, while a number of conventions and laws have been passed internationally in the past 10 years to try to stop the business – such as the Council of Europe convention, 2005 (pdf) and the EU directive on trafficking, 2011 – there is no consistent will to implement these measures fully or support them with proper budgets.

We applaud Vivienne Harr’s strong, persistent and tireless efforts to not only raise money for this sad current state of affairs in child slavery but also her success along with the help of her family and community of continuing to bring this ongoing nightmare to the world’s attention.

Freetheslaves.net raises a very important closing question. Since slavery has always been part of the human experience; can we really expect to end slavery in our lifetimes?

“Yes. We do not face the barriers previous abolitionists had to overcome – the laws are in place, there is no large-scale economic vested interest supporting slavery, and everyone agrees that ending slavery is morally right. What’s more, while 27 million is a large number of slaves, it is also the smallest proportion of the world population to ever be in slavery. The estimated cost of freeing all slaves is in the tens of billions of dollars, a large sum, but similar to the cost of the city of Boston’s “Big Dig” road tunnel project. Eradicating slavery is an achievable goal that will bring a sizable “freedom dividend” to the global economy.”

It will also give future generations the opportunity to experience what so many desire and deserve the most.