Whenever a beautiful female submission wrestling legend like Viktoria of Hungary makes a decision to participate in an International match, it gets your attention.

Take a deep breath and please let this resonate.

In our competitive female submission wrestling industry, Viktoria has one of the longest and deepest resumes.

The team at wrestlewiki.com, arguably our industry’s best encyclopedia educated, “Viktoria M is a Hungarian wrestler.

She has a stellar resume dating back at least 14 years and in that time period she has achieved many things in the industry.

Prior to her career in wrestling, Viktoria’s athletic background was mainly swimming which she started when she was four years old. She also attended the gym and still does.

Viktoria started wrestling back in 2000 with DWW; she was asked by a classmate who was already wrestling for the video company to take part in an event. Initially she did not express any interest and turned down the offer but her classmate invited her to an event that was going to be on the following week. Her intention was just to be a spectator, but the producer insisted that she participate. Viktoria’s career started with DWW which spanned over 10 years.”

We also enjoyed watching Viktoria wrestle at the great Femwrestle Events in Troisdorf, Germany where she excelled in International matches as well, taking on London Wrestling Studio’s legendary Sable, Suzie of Hungary, Mysteria of England, Alice of Poland and others.

Virtually every wrestling company in Europe and some in America and Canada, have been fortunate to have Viktoria wrestle for them.

It is impossible to know how many matches Viktoria has wrestled in over her illustrious career but we would guess, well over 100.

Which raises a question.

Why did Viktoria take on this match against a muscle bound warrior like Buffy, otherwise known as Barbara Buffy or Strong Amy?

It takes place at Antscha’s legendary studio in Hungary but it rattles our brain as to why Viktoria would even consider this.

Research indicated that she previously retired and now wrestles simply because she chooses to.

If she took a match against a newer girl who she was most likely going to dominate, we could understand that. But why a muscled fighter? Viktoria is in wonderful modeling shape and athletically fit as well.

Having said that, she is not heavily muscled.

So, let’s say for example if Germany’s Warrior Amazon, Hungary’s Sheena or Russia’s Amrita took this match on, it would not be shocking because they are very strong girls with an abundance of sexy feminine muscle.

What is the challenge with wrestling strong muscled girls?

You can get hurt. Badly.

Sometimes the other girl involved doesn’t know their strength.

The way that Sheena and Amrita knocked each other around in their fierce match, as they themselves acknowledged, it was a wonder that one of them didn’t go to the hospital.

We purchased the match and completely agree.

Strong Amy, otherwise known as Buffy, fights out of the Czech Republic and she is a specimen.

Serving as referee, Antscha calls Viktoria’s opponent by the name of Buffy, so we’ll call her that too.

Today? Viktoria will be in tough, to say it mildly.

Antscha describes it as an International match and sets it to begin.

The match starts out rough and tumble with Buffy pushing and rolling Viktoria around the room and against the wall.

The good news for Viktoria is that Buffy, though talented, in our estimation, is not elite level skilled.

That actually would be good news and bad. Which do you want first?

Wrestlers at the elite level will indeed defeat you, but not hurt you.

One of the aspects to working with a great recruiter like Isamar of the San Jose, San Francisco Bay Area, back in the day, was that she could easily defeat any female wrestler we placed up against her, but she was technically skilled that she would never hurt them.

Now for the bad news, which isn’t too bad.

An elite muscled wrestler will virtually always defeat you. Always.

Viktoria just needs to ride out the initial storm and begin to measure how she will play this. Be mostly defensive and wait for Buffy’s mistakes? Or at some point be the aggressor herself?

The two girls tussle on the ground with no one really gaining an advantage. They both temporarily trap the other with scissors and both eventually escape.

Viktoria once again tries to submit Buffy with her legs, but can’t,

Buffy seizes the advantage and traps Viktoria in a headlock. As she squeezes, we can see the veins protruding in Viktoria’s face. There’s no escape.

Viktoria taps at the 3 minute mark.

Viktoria? Our suggestion? Don’t be a hero, tap out early.

As the two engage, Buffy immediately bull rushes Viktoria and like a Rodeo Bull Rider, Viktoria clasps Buffy with a headlock and tries to hang on for dear like.

Sorry Viktoria, that’s not going to work. Good idea though.

Buffy is way too strong and breaks Viktoria’s headlock. Now she has Viktoria’s back, places her in a brutal choke where Viktoria’s facial veins are popping out. Again.

Viktoria taps and clearly was in pain.

She is a resilient warrior and, though we have absolutely not watched the video, we feel confident that Viktoria will adapt and make it competitive.

The two begin with hand fighting and Buffy forces Viktoria, on her back, to the mats down below again.

Viktoria initially is trying for a floor to sitting body scissors but her legs just aren’t strong enough to trap Buffy. She then attempts a feeble triangle choke but Buffy easily pushes that aside, flattens out feminine Viktoria and erotically falls upon her attempting a frontal smother on the Hungarian princess having the feminine Viktoria kicking her gorgeous legs to try and escape.

Still in creative mode, Buffy rolls Viktoria to the side and traps her in a side head scissors. The veins are popping out in Viktoria’s face once again. Buffy squeeze with the steel muscles and at the 5 minute mark, Viktoria taps out once again.

3-0 for the Czech Dominator.

As they get ready, and, Viktoria is adjusting her bra, we interpret that the Hungarian star has a look on her face of, I agreed to do this but I wish I could get the heck out of here.

As we stated, we know Viktoria will not give up.

Once they engage again, Buffy gets the initial advantage for a choke but this time Viktoria escapes and while under duress, gently traps Buffy in a head scissors of perfection. She squeezes and Buffy silently taps out.

Us? That’s easy for you to say Antscha, as you stand from a distance analyzing as a referee.

We’re not so sure that a disheveled Viktoria would agree with you.

Buffy rushes Viktoria again and blasts her against the wall. She is coming in for another head hunt and even covers Viktoria’s mouth. Can Viktoria breath? This would not be an Isamar tactic.

Antscha mercifully warns her not to cover Viktoria’s mouth.

This gives Viktoria a little bit of an opening. The feminine beauty is now on top of Buffy, which appears to be a lot like riding mount Kékes during an earthquake.

Undaunted, the former DWW Alum is now taking control of the fight. She has Buffy almost in a full nelson from behind and then maneuvers Buffy into a smother position.

You put your hand on my mouth, I put my breasts upon yours.

The game is now afoot and Viktoria only trails by one point.

Okay arm chair quarterbacks. What do you say? Will Viktoria tie this up? Will all of the DWW training come into play? Take a risk?

The final round now begins.

Buffy has a relatively subdued expression on her face and if she is strategic, poker faced.

As the two engage, Buffy bull rushes Viktoria so hard, she rolls her. Stunned Viktoria tries to get up but Buffy quickly traps her from behind. She means business.

As she has Viktoria trapped on the floor, Buffy encases her head in a fierce head scissors. Viktoria is in big trouble and use her legs to push off on the wall.

Buffy squeezes hard and Viktoria taps out. Buffy continues to squeeze. Viktoria has to tap again and Antscha intervenes and says “stop”. Submission for Buffy.

It is now 4-2 for the Czech Session Girl who is clearly taking this match very seriously. We applaud her. Just because Viktoria is a legend, don’t hurt her, but don’t go easy on her either.

Due to time, the match is essentially over. Still, we are curious to see how this one will end. There doesn’t appear to be animosity between the two, but to put it mildly, there is tension in the air.

Viktoria surges for a headlock. It is quickly rebuffed by Buffy.

Buffy uses her muscles to push Viktoria backwards. Relegated to the floor, Viktoria uses her legs to encase Buffy in a floor to sitting body scissors. Buffy pushes forward. Viktoria now wraps her arms around Buffy with a reverse choke. Then tightens it. Traps her in a body scissors too.

Viktoria is determined. She keeps Buffy trapped in that body scissors and maneuvers it into a triangle choke. She squeezes. Squeezes more and Buffy taps out.

This is an unexpected mat classic that should have played out in front of a large audience so we are happy to bring it to you.

In a class act, Viktoria offers her hand out to congratulate Buffy.

It is matches like this that let us know why the competitive female submission wrestling industry holds Viktoria is such high regard. 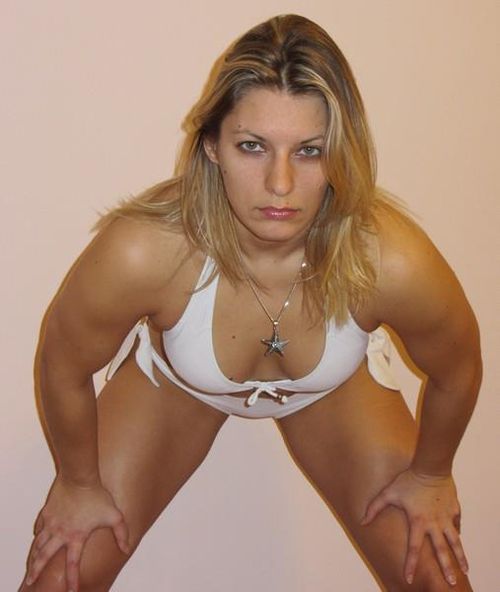