Irma Gonzalez, forever a women’s wrestling legend, got her start in 1955. 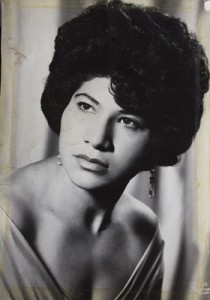 The year 1955 is so long ago and so far away that probably for those who were born during the decade of the 1950’s, not only can they remember it, they can feel it. As the soothing Brazilian singer and songwriter Morris Albert emphasized in his 1975 masterpiece, it’s about “Feelings”.

Things felt so different then. It is one thing to see an old black and white cable television film and attempt to sense what it was like, but it’s another thing to have been alive and aware of the mood and daily life of a powerful yet simpler era and feel what it was like. Let’s please walk down memory lane.

What was happening near or during 1955?

For Irma Gonzalez, to be a female wrestler in 1955 was an extreme oddity and it took determination and courage to continue to participate. Someone has to open the door for others to follow. Sometimes due to public resistance, someone has to kick the door down.

A classic piece that categorically seems to depict the thinking of a woman’s role in American society was the famous article that appeared in Good Housekeeping magazine, named “The Good Wife”. Here are a few eye openers.

1. Have dinner ready every day for your husband when he comes home.
2. Never complain if he comes home late.
3. Don’t question his judgment; he is the master of the house.
4. A good wife always knows her place.

In an interview found at www.guanabee.com, Ms. Gonzalez states, “I used to be an acrobat and a contortionist, one that traveled all over the place. But then my father’s circus burned down which forced my family to move in with my grandmother in the northern part of Federal District [Mexico]. When I was 13, a neighbor asked me to participate in a wrestling event because they were missing one performer. I told her ‘I don’t know how to wrestle!’ Although I was very athletic because of my experience with the circus. So my friend said ‘Don’t worry, nothing is going to happen. Just get up there and hold on to the ropes.’ So she convinced me.”

Even though Irma received a good whipping, she was hooked.

Born Irma Morales Munoz in Cuernavaca, Morelos, Mexico, to a family that owned a circus Ms. Gonzalez was destined to fly. From humble beginnings, Ms. Gonzalez was able to travel the world and have her impact on history.

Here are some descriptions of the village that helped blossom Irma Gonzalez.

The welcoming site www.visitmexico.com reveals, known as “The City of the Eternal Spring”, Cuernavaca, Morelos, is the chosen destination for many city residents, due to its closeness with Mexico City. The quietness you can breathe in each of its spots and, of course, the pleasant warm temperature it enjoys most of the year (21º C). Only 85 kilometers away from Mexico City, the capital city of Morelos has been adopted as an amusement and relaxation location for almost everybody who has known it, from Aztec emperors and conquerors to princes, artists and a great deal of retirees.

Its landscapes are full of colors and fragrances coming from the flowering of bugambilias, jacarandas, African tulips, lilies, jasmine, tabachines and daisies.

Beautiful plazas and colonial buildings, all full of history, form the Historic Centre of Cuernavaca, which shows off the Cathedral atrium, where the first “pastorela” in the country was performed.

Wikipedia adds more history and structure. The city was nicknamed the “City of Eternal Spring” by Alexander von Humboldt in the nineteenth century. It has long been a favorite escape for Mexico City and foreign visitors because of this warm, stable climate and abundant vegetation. Aztec emperors had summer residences there, and today many famous people as well as Mexico City residents maintain homes there.

Considering its location of just a 30 minute drive from Mexico City, Cuernavaca traditionally has been a center of Mexican society and glamour, with many of the country’s wealthy citizens owning sprawling mansions and haciendas in this cultural haven. Cuernavaca is also host to a large foreign resident population, including large numbers of students who come to study the Spanish language.

The 1985 Mexico City earthquake also pushed many well-to-do families there, fearful of the next catastrophe. In many of these cases, the main breadwinner commutes each day to work in Mexico City. This has produced the great increase in housing developments on the outskirts of the city, especially in the late 1990s and 2000s.

Cuernavaca has been called the “Beverly Hills of Mexico” because from just about any elevation in the city, one can see that many of the homes have swimming pools.

Irma Gonzalez is an old ‘luchadora’ (female wrestler) who bears the marks of a life spent battling in the ring and performing acrobatic daredevil moves. You can go online and watch video footage; her acrobatic skills are often on display as well as her physical toughness and strategic smarts.

Wikipedia informs, Lucha libre, meaning “free wrestling” is a term used in Mexico, and other Spanish-speaking countries, for a form of professional wrestling that has developed within those countries. Although the term nowadays refers exclusively to professional wrestling, it was originally used in the same style as the English term “freestyle wrestling”, referring to an amateur wrestling style without the restrictions of Greco-Roman wrestling.

Mexican wrestling is characterized by colorful masks, rapid sequences of holds and maneuvers, as well as “high-flying” maneuvers, some of which have been adopted in the United States. The wearing of masks has developed special significance, and matches are sometimes contested in which the loser must permanently remove his mask, which is a wager with a high degree of weight attached. Tag team wrestling is especially prevalent in lucha libre, particularly matches with three-member teams, called trios.

Lucha libre wrestlers are known as luchadores (singular luchador) (“wrestler(s)”). They usually come from extended wrestling families who form their own stables.

Ms. Gonzalez wrestled men, tag teamed with the stars of the 1970’s when women’s wrestling was rising in popularity and excelled during the 1980’s when female wrestling was seeing a boom in attendance and acceptance in the United States, Mexico and Japan. Martha Villalobos, Irma Aguilar, Chela Salazar and Lola Gonzalez were some of her contemporaries. She wrestled at the famous Mildred Burke studios where some of the documentary style film is still online.

Her creative film resume includes acting in Doctor of Doom (1963), Wrestling Women vs. the Aztec Mummy (1964) and Los hermanos del viento (1977).
Some of her nicknames were:

In our quest to continue to shed light on the female wrestlers of the past who paved the way in more challenging times for the increasing popularity of the global sport of women’s submission and freestyle wrestling, Female Competition International, fciwomenswrestling.com is glad to share the experience of an impressive wrestling icon like Irma Gonzalez.

She will forever be in our feelings.