Fans in the competitive female grappling industry are always in great anticipation of female wrestling events since there are so few of them.

One group that puts on an event exceptionally well is Fight Pulse in the Czech Republic. To our delight they have a wonderful line up.

Let’s have them introduce the event. 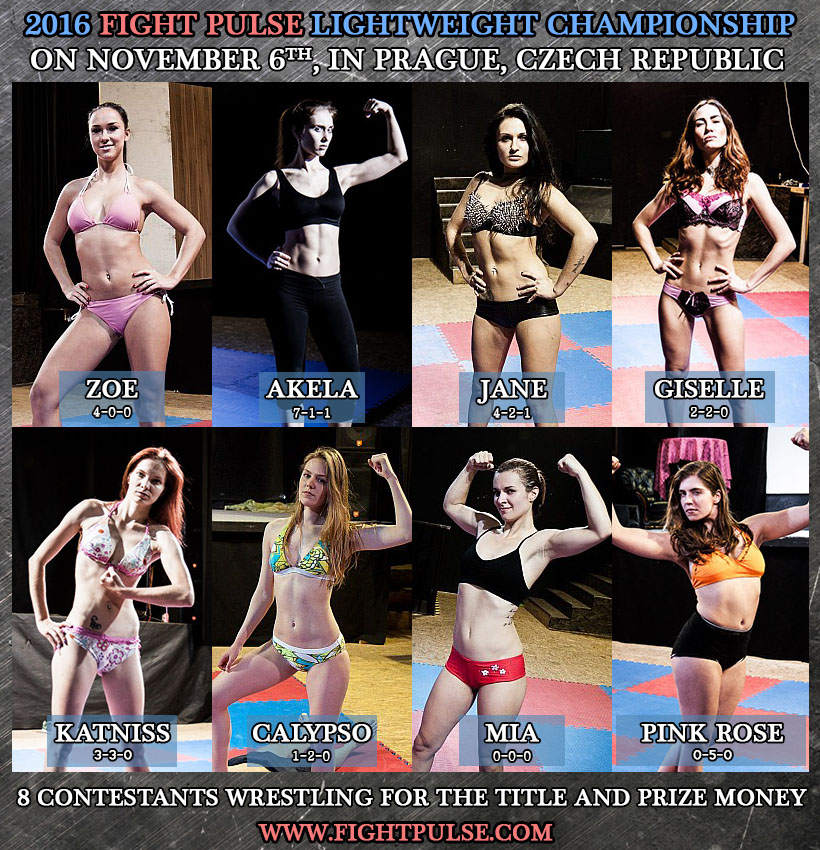 The wait is over! Dear Subscribers and Visitors, it’s time for the annual female wrestling championship in the lightweight division (up to 65 kg)! Exactly a year has passed since we held our first championship, which produced some very popular F/F matches, the championship title match between Zoe and Akela, FW-21, quickly becoming a best-seller.

Many of you have asked us during the last two months about the line-up of this championship, which goes to show the excitement of fans in competitive tournaments. We are just as excited as you are, dear fans. So, without further ado, here’s the roster of the event:

8 competitors will be wrestling for the title of Fight Pulse Lightweight Wrestling Champion, this trophy, and prize money. The latter is awarded for the first 3 places. The prize money for the champion this year is five-fold the amount given to the winner of the 2015 championship.

The tournament will be in play-off style, starting with quarter-finals. The original 4 match-ups and the tournament chart will be presented with our first release of the championship, which will also include an introductory segment (video) with interviews with all wrestlers.

The matches will be held under the usual Fight Pulse pins & submissions rules. Each mach will last 12 minutes, except the final match, which will last 15 minutes. If there’s a draw by the end of this time, 3 minutes of overtime will be added without stopping the action (5 extra minutes for the final match). The wrestlers will be informed verbally of overtime start. The first wrestler to achieve a pin or submission during the overtime will be declared the winner. If by the end of overtime the match is still a draw, the winner will be decided by 3 judges based on who was the more offensive and active wrestler of the two.

The tournament will be held on Sunday, 6th of November, 2016. The release schedule of the matches is as follows:

While the event is organized and will take place as per the agreed arrangements, we would highly appreciate any sponsorship, in order to increase the wrestlers’ pay for partaking in the tournament, increase the prize money, and assist with organization fees. This will help us carry out the event at a high level, as we aspire to. Your assistance will also mean that we can possibly organize bigger competitive tournaments in the future. By supporting Fight Pulse you are supporting the competitive female and mixed wrestling industry.

The three existing sponsorship options are $50, $100 and $200. Any input is greatly appreciated, and means a lot to us! So, if you would like to contribute a different amount, please let us know about it through the contact form and we will create another payment link just for you. Here are the existing custom payment links if you decide to become a sponsor of the event:

What will sponsorship get you besides our appreciation? If you have contributed $50 or over, email us the name of your favorite wrestler after the payment, and she will thank you for your contribution in a private video. Also, those who contribute $100 or over will get be invited to the tournament, to watch it live.

If you are unable to contribute via payments, but would like to support us and enable future bigger championships, please spread the word about the tournament by linking to this page. You can use this full-size championship poster for the purpose: https://www.fightpulse.com/2016poster.jpg