Life is like a box of chocolates. You never know what you’re going to get?

Much of the time.

Sometimes however, with that box of chocolates, what if you are willing to pay the money and it is custom ordered?

You know exactly what you’re going to get.

Part of the reason it is challenging to write about newer girls or one that primarily focuses on sessions is that you don’t know what you are going to get and if you purchase the video, it can turn out to be a real clunker.

That’s why we like watching Antscha’s fully competitive events. Given the established performers, especially from her Hungarian stable, in terms of a competitive full effort match, we know exactly what we are going to get.

That will be on display here with Kyra vs Aisa.

We have seen Kyra wrestle before, primarily at the great Femwrestle Events in Troisdorf, Germany and in a winning or losing effort, she gave her best effort.

In January of 2015, here is what our associates at Femcompetitior Magazine had to say about Kyra, “The global female submission wrestling industry is undoubtedly flowing through a cultural and physical shift where the competitors of the present and foreseeable future must incorporate some mixed martial arts and weight lifting if they have any hopes of being relevant on the global fully competitive women’s wrestling scene.

Kyra from Hungary fits the profile of the next generation from two perspectives. She is participating in a weight lifting program and she’s connected to a team of serious competitors.

According to online sources, Kyra is a double world champion in Bantam weight boxing.”

Good to know. We have a committed Fem Competitor in front of us.

Aisa has a very solid reputation as well and for years has competed against the best that Hungary has to offer, often with winning results.

In June of 2018, here is what FCI Women’s Wrestling Magazine had to say about Aisa, “In viewing her matches that we purchased, Aisa seems to be very comfortable fighting from the ground, she doesn’t submit easily and her body strength is evident. She loves to use her legs to control her opponent and at times can over power them. We would not describe her as a body builder but she is very strong.” 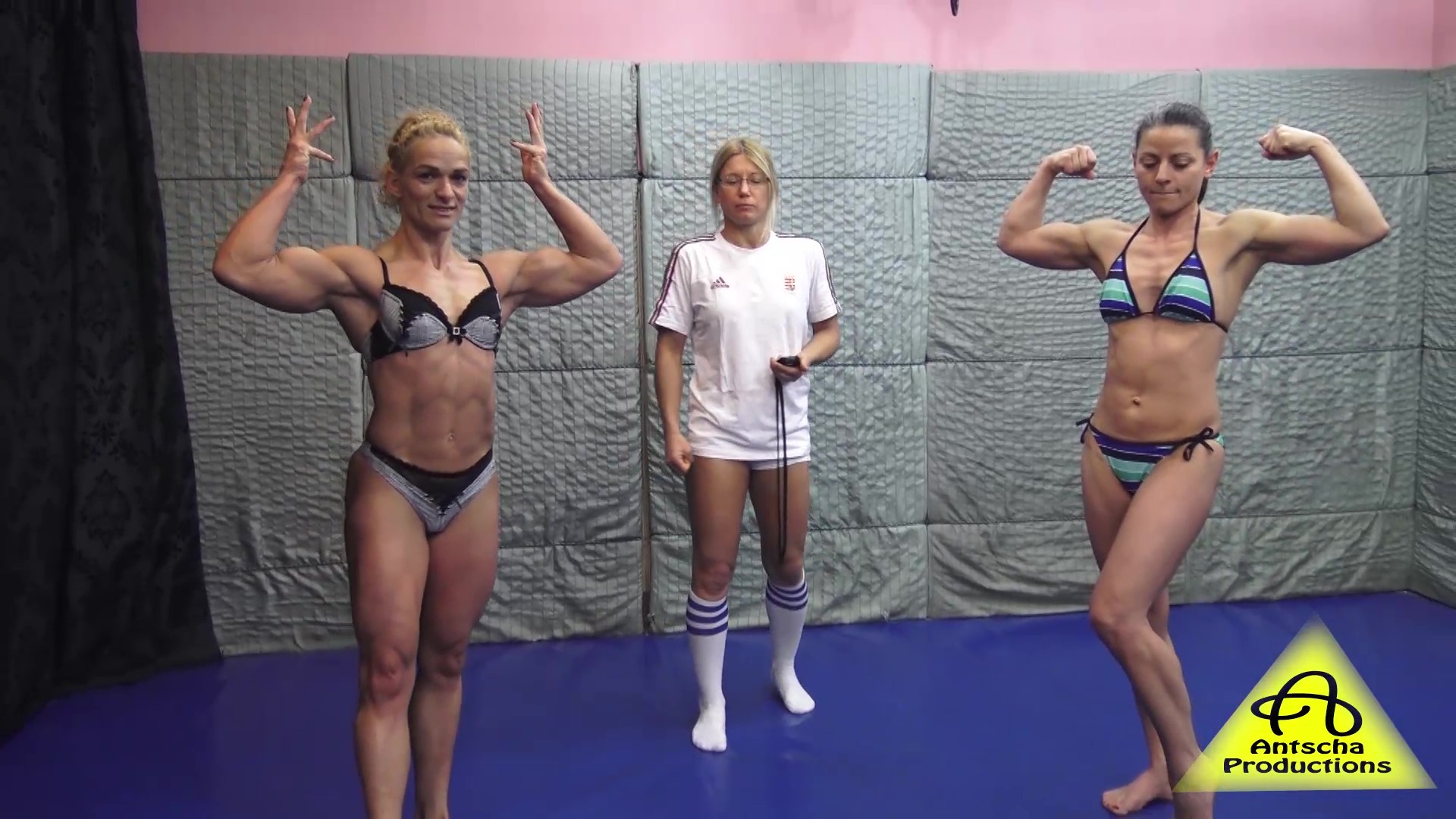 The two fit women begin with posing to show off their stealth bodies.

Antscha admonishes that all submissions will be allowed.

The girls begin on their knees and now we know what to expect.

Upper body hand fighting. Here a Fem Competitor should keep engaging until she knows she can setup her opponent in a secure, pre-submission hold.

Aisa makes the mistake of not doing so.

She falls to the floor to try and trap Kyra in a floor to sitting body scissors and Krya easily escapes.

Why is this a mistake on Aisa’s part?

She has immediately placed herself in a weaker position by voluntarily falling to the floor. It’s one thing if Kyra had to struggle and take Aisa down. It is another thing to willingly do that for her.

Kyra immediately seizes the opportunity, grasps Aisa’s wrists and sits on top of the brunette’s chest. One, two, three, four and five, Antscha counts Aisa out for the submission.

In the next round Kyra now makes it clear that she is the front runner and even has the potential to dominate this match.

Our dark haired beauty does appear to be out of sorts here.

Things could turn around but we will admit we are a little surprised here. As we saw at the Femwrestle Events, Kyra is not unbeatable and given Aisa’s extensive resume, at least at this point, we thought she would put up a better fight.

Kyra is in complete control at this point and Aisa is helplessly grunting real feminine dismay.

Kyra adds to Aisa’s troubles by encasing her in an upper body scissors as well.

They struggle for some time.

Aisa does eventually break the hold but Kyra is right back on top off her as Aisa kicks her feminine legs to no avail.

Kyra now efficiently uses her body, head forward and legs backwards towards Aisa’s face as the brunette lies helplessly underneath and executes a fierce head scissors.

They appeared to desire a brief rest but Antscha encourages them to keep going.

A little dazed, Aisa is easy prey for another mount by the more muscular Kyra. The feminine Aisa finds herself underneath again and the muscular Kyra begins to dominate her once more with that dreaded arm bar and scissor combination.

Lying flat, Aisa tries to surprise Kyra with a head scissor of her own but Kyra simply swats it away. Aisa continues to sweetly groan and kick her legs in struggle, desperately trying to escape.

With many options, Kyra now goes head hunting and while she sits atop Aisa she uses her strong arms to sweep Aisa’s head into her waiting thighs. She now fully sits on top of Aisa, dominating the feminine girl once more. Antscha begins to count. In vain, Aisa raises her bikini clad hips to try and throw Kyra off. One, two, three, four and five and the beautiful helpless Aisa is counted out.

When the two beauties begin to engage, at least Aisa is smiling. That’s the good news. The bad news is that she has no comeback plan. That becomes clear when she once again tries the floor to sitting body scissors on Kyra who will easily fight that off and once again sit on Aisa’s chest.

Kyra has mounted her so deeply that you can no longer see Aisa’s face underneath the more dominant girl. Aisa’s beautiful legs begin to helplessly kick again and she even tries to use her legs for an arm under hook to try and pull Kyra off but all that happens there is Kyra grabs a leg and for a moment has a folding pin on Aisa with Aisa’s curvy bottom helplessly up in the air.

She breaks her legs away but she is still going to get dominated and pinned by Kyra. Antscha counts to five and Aisa is submitted once more.

At this point it would be easy to say that Kyra’s strength is too much for Aisa but that is only part of the story. Kyra’s technical skills are better and surprisingly, even though she clearly has seen Kyra wrestle before, Aisa has absolutely no plan to change things.

This time Aisa actually tries something different. She leaps on top of Kyra’s head trying for an under hook choke. She makes progress but ultimately Kyra breaks the hold. Relentless Aisa does finally trap her in a under the neck choke and headlock. This is her opportunity and she needs to lock and squeeze.

Give Aisa credit for changing things up and the headlock is a great idea. The only problem is she is trying to apply when she is unstable herself and Kyra keeps breaking away.

This goes on for some time.

Aisa then goes for an elongated reverse head scissors, which has promise, but Kyra breaks that off as well.

Kyra raises her legs to try for a floor to sitting head scissors. Unless you can close the deal, that is often a bad idea. That is what Aisa has been doing but since Kyra does it here, Aisa flips around and flattens out on top of Kyra.

Can Kyra use those strong arm muscle to flip her off?

One, two, three, four and five. Aisa smother pins her for the count and is now on the board.

In this round it appears the winner will simply be less tired.

Both are breathing heavily but Kyra is the aggressor and easily takes down a somewhat tired Aisa. She uses her strength to sit on top of Aisa and the sensuous brunette is quickly counted out.

Antscha encourages them to keep going.

They begin with hand struggle and Aisa finally gains control. She is on top and has options.

Curiously she tries to for an arm bar and we can see Kyra’s strong muscles flex so we sense that is not remotely going to work for a submission. Aisa appears to sense the same thing and goes back to what worked for both of them before.

Aisa goes for the cross body pin and then turns it into a smother.

Whoever is on the bottom, Kyra here, will not have the strength to toss the other off. Great idea Aisa. Kyra is counted out to five.

5-2 for Kyra. Aisa is now making the fight respectable.

The two stare at each other for a minute and begin upper neck and hand fighting. Kyra gains the initial control and pushes Aisa backwards.

The two are engaged in leg struggle and Aisa traps Kyra in an ankle lock. Kyra quickly submits.

This is a little more of what we expected.

Kyra leaps towards Aisa for the advantage. They struggle but, on top, Kyra wisely knows she doesn’t need to.

Stay with what has worked before.

Kyra initiates a cross body pin on Aisa which soon turns into the effective smother. Aisa kicks around for a bit but at this stage is too tired to kick Kyra off.

Antscha counts, one, two, three, four and five and despite Aisa kicking her sensuous legs, this round is over.

We do as well.