If you are living a dream life, more than not, you are a very wise person.

Solomon Naumovich Rabinovich, better known under his pen name Sholem Aleichem (February 18, 1859 – May 13, 1916), was a leading Yiddish author and playwright. The musical Fiddler on the Roof, based on his stories about Tevye the Dairyman, was the first commercially successful English-language stage production about Jewish life in Eastern Europe.

He was quoted as expressing, “Life is a dream for the wise, a game for the fool, a comedy for the rich, a tragedy for the poor.”

The name Sonia in the American, Swedish, Russian or Greek translations mean Wise or Wisdom. Given the great efforts that DWW’s Sonia gave as a new wrestler, her name fits her brief yet quick mastery of the mats well.

Sonia with her exotic Eastern European dark Gypsy looks is absolutely gorgeous. She could have easily been a model. 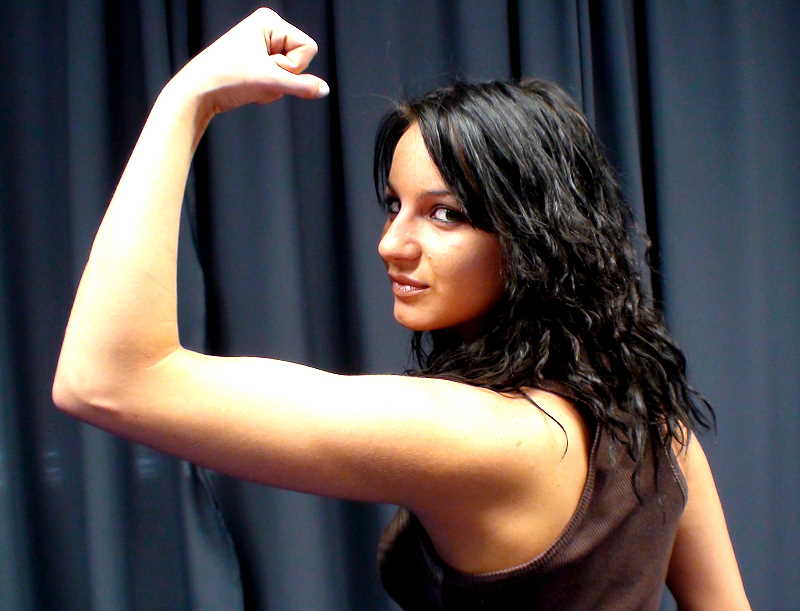 Fortunately for us she was a girl next door who decided to wrestle.

The reviewers loved her talents as well.

“Welcome back Sonia! This is her return wrestling match after her pregnancy pause. Sonia is skeptical and pretty unsure if the fans would still want to see her and she certainly knows that it will be very hard for her returning and finding a free place in DWW’s strong and competitive team.”

Now for the competition.

Do not seek to follow in the footsteps of the wise. Seek what they sought.….Matsuo Basho

“Before the match Luisa made an interview with Sonia and then Luisa made some pictures from Sonia.

Here is the recollection of the exciting tussle with Pia.

“This is Sonia versus another newcomer in a pins and submissions wrestling match. Pia has already had two pins only matches while Sonia has had two pins and submissions matches. Pia is smaller than Sonia, but that little ex-gymnast is determined, quick and much stronger than she looks like. Sonia however is confident and prior to the match she was sure that she could easily beat up smaller Pia while she thought she’s much stronger than her. Once again this is an aggressive fight between two newcomers and there’s no holding back at all. They want to destroy each other and finally one woman ends up actually totally destroyed and she quits this exciting match with lots of tears because of frustration and anger.”

Interesting. This is another Sonia match where someone ends up in tears. We told you that she was intense.

Our brunette beauty made more headlines. Let’s relax and listen to one more re-telling of Sonia’s tour of wisdom. “Sonia had been pretty aggressive in her first match versus her beautiful counterpart Megan F. – but now it was time for giving her a second chance versus a much more experienced opponent: Eva N. – Of course there is a huge difference in experience and skills as it was only Sonia’s second wrestling match in her career. But Sonia definitely has got some kind of “winner’s mentality” and she hates nothing more than losing.”

It’s easy to admire Sonia’s spirit. In her role as another sensational and sexy DWW Czech beauty, it’s time revisit Sonia’s name and her exceptional country.

The penetrating naming site sheknows.com shares regarding Sonia’s name, “People with this name have a deep inner need for quiet, and a desire to understand and analyze the world they live in, and to learn the deeper truths.

People with this name tend to be a powerful force to all whose lives they touch. They are capable, charismatic leaders who often undertake large endeavors with great success. They value truth, justice, and discipline, and may be quick-tempered with those who do not. If they fail to develop their potential, they may become impractical and rigid.”

Sonia was one who seemed to have developed her potential. She was the new cool and worldly wise.

What communities in Prague are the new cool and worldly wise to hang out?

Dressed in cool threads, a site with a cool name, wandertooth.com provides us with some insight. “The first thing to understand when you’re picking the best place to stay in Prague is the numbering system. Central Prague is made up of different districts, with areas of Prague 1 through Prague 10 considered to be more-or-less convenient by residents. While Prague 1 is the heart of the tourist district, where Old Town Square and the Castle is located, it doesn’t follow that Prague 10 is the furthest away. Prague 1 through 10 sort of spiral around Prague 1, but it’s far from a perfect spiral.

Vinohrady has long been king of Prague’s cool neighborhoods, and it is where a lot of expats and young Czechs want to live. Stretched between 2 metro stations, Náměstí Míru and Jiřího z Poděbrad (or JZP), on Metro Line A (Green), and with a tonne of trams, it’s really convenient, and is within walking distance to Wenceslas Square. There are lots of cafés, restaurants, and pubs, and nearby Riegrovy Sady Park has an awesome beer garden and views of the city.”

The kindly site eurocheapo.com gets in on the action too. “As I mentioned, Vinohrady is a nice place to walk, so I’d recommend just taking a stroll through its quaint streets. Café Fra (above) is actually an excellent place from which to begin your journey. Make a left outside the café’s door and then make either an immediate right onto the street Bruselska, which will take you down some quiet, pleasant streets, or go straight ahead onto Belehradska, which is full of shops (including the Antikvariat Belehradska, below).”

There is so much to Prague that this is just a starting place, but if you ever visit and you’re feeling up to it, you know where to walk and hang out.

We are made wise not by the recollection of our past, but by the responsibility for our future….George Bernard Shaw

Sonia’s time as a DWW wrestler was brief, cool and memorable. We really appreciate her tour. She was so enticing that we had to bring her memory back to life, even if for a moment.

We felt it was the wise thing to do.