Rough and tumble life experiences are common to us all. What separates those that succumb from those that learn and thrive is the ability to rise once again after falling.

Miyamoto Musashi, 1584 – June 13, 1645, was an expert Japanese swordsman and rōnin. Musashi, as he was often simply known, became renowned through stories of his excellent, and unique double bladed swordsmanship and undefeated record in his 60 duels.

He was quoted as saying, “All things entail rising and falling timing. You must be able to discern this.”

The talented Fem Competitor Rene of DWW fame possesses a name that in Latin means To Rise Again. The equally talented naming site sheknows.com expands, “People with this name have a deep inner desire to use their abilities in leadership, and to have personal independence. They would rather focus on large, important issues, and delegate the details. They also have a need for harmony and balance in their lives, and respond positively to beautiful things.”

The greatest accomplishment is not in never falling, but in rising again after you fall.….Vince Lombardi

The challenge for Rene in most of her DWW matches was that she wasn’t just the smaller girl but the much smaller girl. Against Leslie she gave away a 30 pound difference, got in trouble early but didn’t give up. Here is a review that speaks to that. 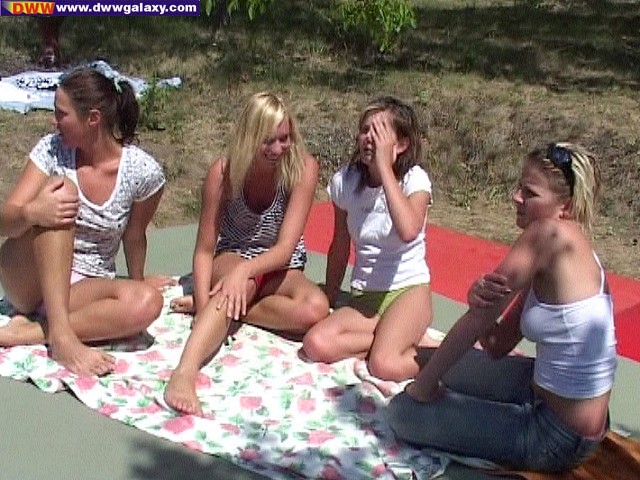 “Without ever needing to be very aggressive, Leslie controlled her opponent throughout this match. Her 30lbs weight advantage was very much in her favor, and Rene found it difficult to shift Leslie when she got on top. Rene conceded 2 submissions inside the first 2 minutes, rather too easily for my liking, but fought much harder for the next 15 minutes or so.”

Very good Rene. You didn’t give up.

The back drop to this match was very telling in terms of relating a powerful life lesson about practice and continual participation in your area of interest. Here is another reviewer’s view on the Leslie verses Rene affair.

“When I last year saw Leslie the first time at the live-event, she wrestled Rene’s sister Andy in a very even match (movie-254) and we know that the two sisters Rene and Andy are quite even in their performance, although Rene is a few pounds lighter.

But one year is a very long time to improve for the girl who got tons of matches like Leslie, while Rene only got a few matches due to fewer requests of sponsors and less downloads of her other matches. And so this match with Leslie, which could have been an even match one year ago, was now a one-sided punishment for Rene.”

People say that if you find water rising up to your ankle, that’s the time to do something about it, not when it’s around your neck.….Chinua Achebe

No doubt Rene acquired some of her wrestling and fighting skills from contesting with her sister Andy in their private life. The friendly feud spills over into DWW’s Danube complex.

“This is another match between the two sisters. There is a very entertaining interview with both of them before the match when they are talking about their fights they have had against each other when they were younger. This time they are challenging each other for a Sgpin match. Younger Rene is more muscular and has the stronger upper body, while elder Andy is the heavier one of the two sisters. Both sisters are evenly matched and you can see that they are fighting for their pride until the end when both are totally exhausted and the loser immediately seeks for revenge. This is a very emotional and interesting match between two real sisters.”

Virtually every beautiful DWW Fem Competitor has a signature match where everything seems to come together. Based upon our research of DWW’s Kendra, I expected her to be the favorite in a match with Rene.

DWW’s Kendra, Her Uncommon Beauty Made Us Think In ….femcompetitor.com/?p=5060

Showing grit, determination and the ability to rise again, here is what actually occurred due to Rene’s great efforts. One fan could barely contain himself.

“This match was filmed on 7th of November 2007. Now I know what G.R. meant when he said to us visitors of the November-event, 10 days later, that we should take a good look to Rene because she is in his opinion one of the most talented novices DWW ever had, but she only has the disadvantage only to weight 99 lbs.

And yes, how right his opinion is. In this match you can see Rene fighting with another novice called Kendra, who weighs 24 lbs. more, is 5 inches taller and is in her mid-twenties while Rene is still a teenager of 18 years.

So, I know that there are many guys all over the world who prefer to see young, small, slim teenager wrestling with a high fighting spirit. So, you all will love Rene after watching this movie.”

Rene certainly rose to the occasion.

“This is my first encounter with Rene and I am not disappointed! She goes after Kendra and defends mightily whenever Kendra goes after her. Probably the most noteworthy aspect of this match is Rene’s enthusiasm and energy. She shows true spunk and desire to win.”

The movie going experience has the ability to transport us to other worlds, live other people’s lives, and feel their joys and pains along with revealing strong life lessons.

One of my favorite films that spoke to overcoming fear and getting up again after you have fallen is Batman Begins. It was a simpler departure from the previous renditions that had become so over the top and comedic in nature that other Batman fans seemed to agree with me and stayed away in droves.

The stellar Film Reviewer Roger Ebert provides us with professional insight. “Batman Begins at last penetrates to the dark and troubled depths of the Batman legend, creating a superhero who, if not plausible, is at least persuasive as a man driven to dress like a bat and become a vigilante. The movie doesn’t simply supply Batman’s beginnings in the tradition of a comic book origin story, but explores the tortured path that led Bruce Wayne from a parentless childhood to a friendless adult existence. The movie is not realistic, because how could it be, but it acts as if it is.

This is at last the Batman movie I’ve been waiting for. The character resonates more deeply with me than the other comic superheroes, perhaps because when I discovered him as a child, he seemed darker and more grown-up than the cheerful Superman. He has secrets.”

One of the secrets he learned from his deceased father was to pick himself up after falling and don’t be afraid.

It’s easy to love DWW’s Rene because she was a younger and much smaller girl but she continued to fight and fight and pick herself up after falling.

I’m certain with Rene, on the DWW mats and in life, after falling down on this journey’s sometimes unpredictable rock strewn roads, like her name resonates; she will get up and rise again.