In the women’s submission wrestling world there are a number of websites which feature women verses women wrestling matches and women verses men in matches as well. The two genres seem to co-exist peaceably. What can be a little annoying to some though is when their once purely women vs women site begins to replace their female vs female matches with women vs men, the latter described as mixed matches.

What is the attraction to men vs women in wrestling matches?

To many the main attraction appears to be eroticism. Female submission wrestlers often evolve from the fitness industry; have some experience in weight training, gymnastics, martial arts or some other female oriented sport. Stated another way, they tend to be in beautiful shape. What is also highly desirable from a male point of view is wrestling a present or former model.

A second reason could be that it may be considered an activity that is taboo. Where else in real life so to speak can a man wrestle a woman in a safe and dignified setting and it’s acceptable?

Another compelling motivation is to test each other’s abilities in a fully competitive match where body weight, size and skill levels balance each other out creating doubt and excitement about who the winner will be.

If you visit well-known sites that list female submission wrestlers by region you’ll notice that once you click on the desired wrestler’s profile besides their qualifications, photos, stats and non-sexual services offered, you’ll see reviews from other males that have wrestled them. Some have come from our circle.

Having said that, for those of you who choose to stay, LET’S HAVE SOME FUN!!!

Starting up north in the great state of Oregon is a competitor named Mindy. We first met Mindy at Jackpin’s great Women’s Wrestling Convention at The Marriott Hotel in San Diego in the year 2008. When our friend saw Mindy get ready to wrestle Mary Ann, both of Fem Wrestling Rooms, he couldn’t wait to wrestle her. She was a sensuous slender brunette in her early twenties. Mary Ann was a curvy gorgeous fair skinned girl with reddish brown hair.

Before attending the event, he thought he would go gaga over the model types but it was the girl next door types that really caught his eye. After Mindy wrestled Mary Ann he decided to have a private wrestling session with both girls.

The first step is to meet with the girl in a public setting and discuss in clear terms what you are looking for and she will let you know what is and is not appropriate. Once you agree to the rules it’s important to stick with it to the dot. If you do something offensive your reputation will spread like a bad oil spill throughout the female submission wrestling world and no one will touch you.

In this world, as the saying goes, we all know one another.

When he met with Mindy she was wearing a bathing suit and wrestling boots and they decided to discuss their expectations in a relaxing setting in the hotel plaza. Surrounding them were a large group of young people in conservative business suits and dresses who appeared to be a part of an organized religion or some extremely conservative think tank group. Needless to say they stared at our friend and the beautiful competitor which only made him quietly chuckle. As you get older and see your mortality, it’s not about what other people think, it’s about doing the things in life that are important to you while the window is still open.

He and Mindy would later have a great wrestling session and since neither of them had previously participated in a private wrestling session, they joked with each other that they were “Session Virgins”.

Another Oregonian is Julie Ginther otherwise known as Julie Squeeze. Our friend had been a fan of Julie for some time so to his amazement one night at Jackpin’s Convention, he saw Julie standing by a window, spoke with her and she was better than advertised. He would watch her wrestle Pandora from Chicago and Grace from the San Francisco Bay Area. He would later meet her again at a smaller event that a reputable Canadian company produced in the Los Angeles area where she challenged him to arm wrestling.

We won’t say who won.

Julie seems to really enjoy session wrestling and it would be easy to find her online by simply typing her name in a search engine or visiting her website. Besides being extremely good looking and personable, Julie is one of the best female submission wrestlers in the world.

We’re going to stay on the west coast otherwise this article could turn into a novel.

One of the most enjoyable experiences our associate had was wrestling with the artist otherwise known as FeFe who competes out of the San Francisco bay area. FeFe has the beautiful balance of a shapely, slightly muscled yet feminine body with long flowing hair and a glowing personality.

She was a little stronger than expected but our friend was determined that FeFe wuz going down! We won’t say who won.

It seems like when we first saw Ingrid she was just a teenager competing in Europe. As of this article, she currently resides in San Francisco. Ingrid cut her teeth with one of the most famous and in terms of competition, highly respected companies in Europe. As far as skill level, she clearly has evolved into one of the better submission wrestlers in the world and has experience in wrestling men as well. When we think of Ingrid and her early years with Dagmar, Luzia, Petra, Sandra, Vera, Hana and the other Euro stars we wonder where did all the time go? Ingrid has blossomed into a beautiful world traveler.

One of our favorites is Isamar (left), who resides in the San Jose area and is a fantastic recruiter. 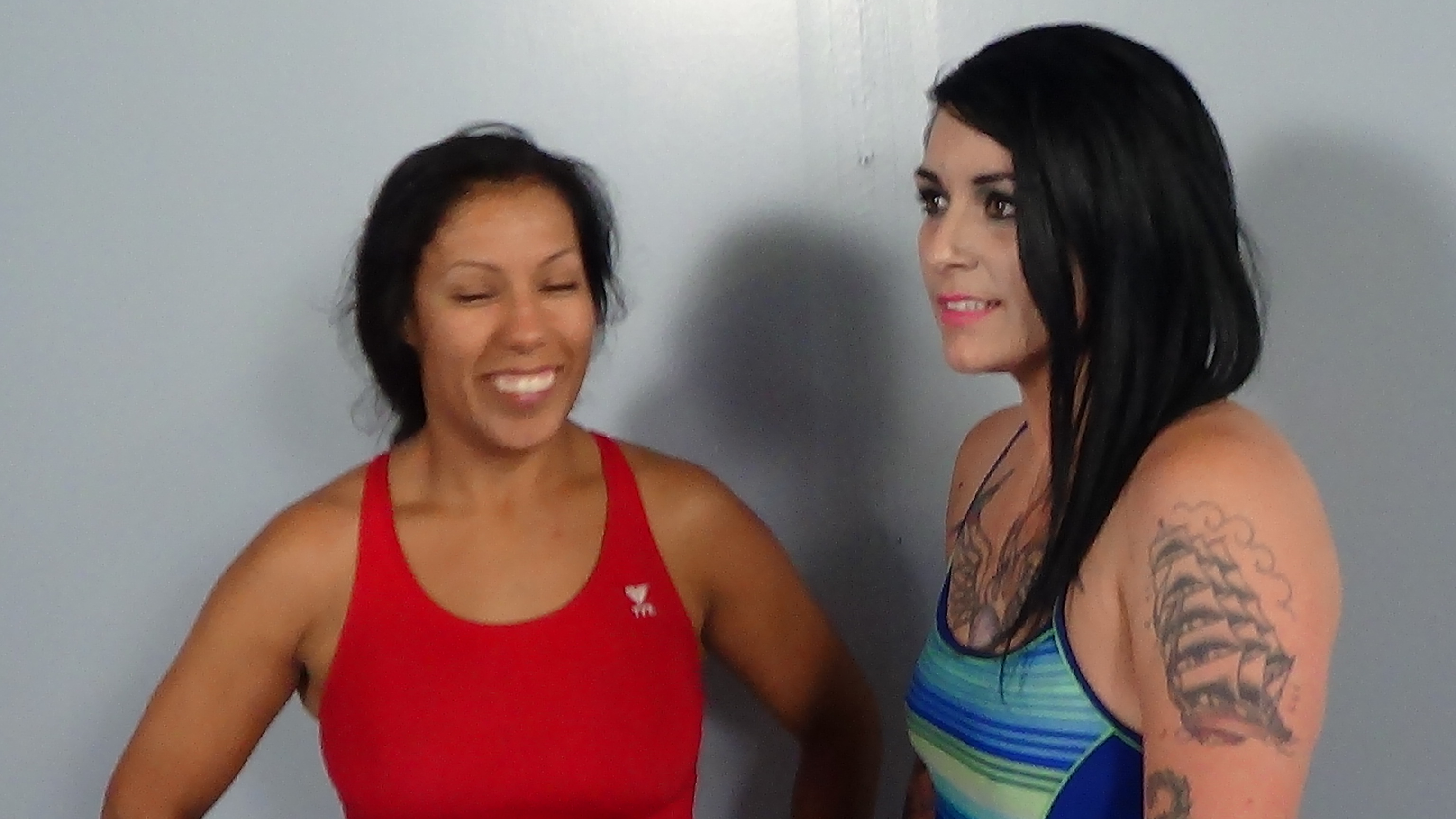 Isamar can truly compete with the big boys and give them a run for their money. Our friend has trained and shot product with Isamar and has had too many good times to mention. Women’s wrestling is a social event so along with a group they have also enjoyed many tasty meals. Isamar loves to wrestle women and men and is very adept at defeating both.

Traveling down Highway 5 to Southern California for many is a relaxing experience cruising through the farmlands and waterways packaged in between majestic, scenic mountains. When you go far enough and you want to wrestle a “model type”, look no further than Samantha. 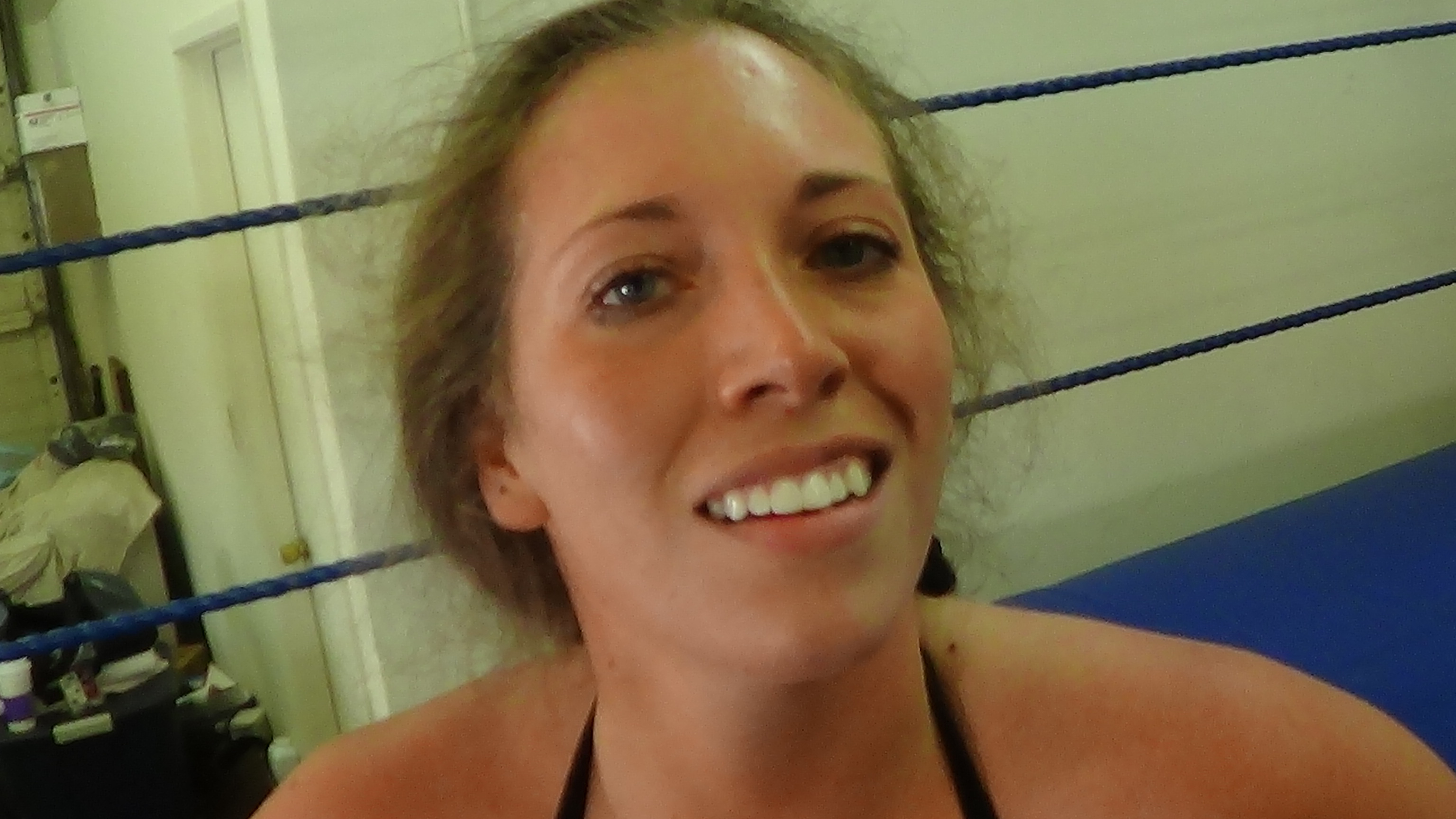 Our friend has known Samantha for years. Samantha has a warm, friendly down to earth personality and in wrestling her you would get the “model type” experience. Samantha’s skill level continues to improve so she shouldn’t be taken lightly.

As the Pacific Ocean sun begins to set, we drive down the coast and visit Robin. For those in the women’s submission wrestling world, Robin is one of the all-time champions. After years of watching Robin defeat virtually everyone we still chuckle at a match where a competitor accused her of dirty tactics and Robin with a deadpanned expression stated words to the effect that she does the best she can because “she’s littler” than most of her opponents. We might add prettier as well. Our associate met Robin at Jackpin’s Convention and began to recite her laundry list of victories and then a few loses and Robin smiled, “Well, you can’t win them all.” Robin is a classy California blonde who wrestles men and if you’re not careful kind of likes to humble you a bit.

There is another attraction to mixed wrestling if you are a producer.

We all have our dream women’s wrestling card and if you get to know and wrestle the competitors you often can find out who the “jobbers” are. We have spoken of them before. They are the beautiful girls who wrestle often, try really hard but always lose.

Many producers like to book the fiercest competitors and there is a lot to be said for that. 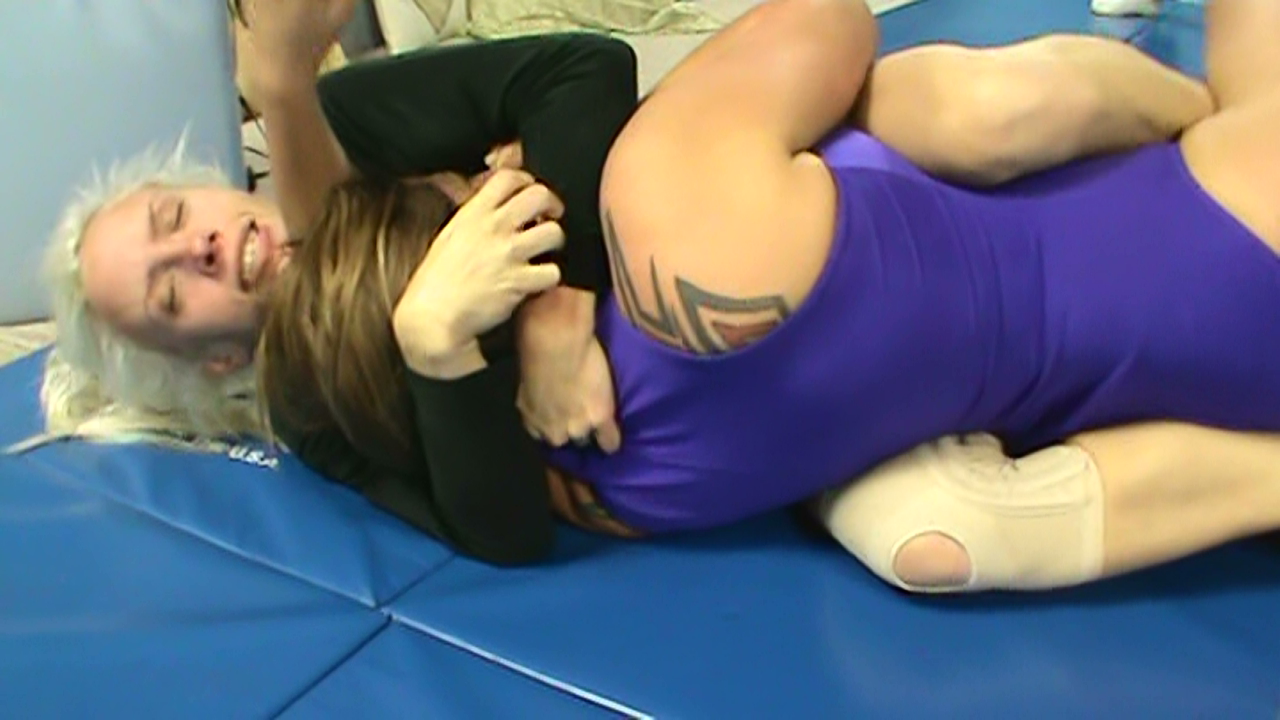 Our associate is plotting and scheming to construct a jobbers wrestling shoot of some of the most well-known jobbers around. The nice thing about it is that most of the beautiful jobbers are not aware that they are jobbers. They actually think they can wrestle.

We hope to write another article where we dip our toes outside of the west coast and present to you some other super nice competitors from the women’s submission wrestling world who we have personally met that reside in other areas.

So, what is the attraction to women wrestling men?

It could be eroticism, challenging a taboo, engaging in real competition or profiling the personalities to put together a dream shoot. The important point to remember is whatever you agree to with the competitor involved is to honor your word. Whatever the reasoning for participation, it’s probably one of the few battles of the sexes that both genders look forward too. The focus for most is to have a good time and have some fun. As far as who wins? 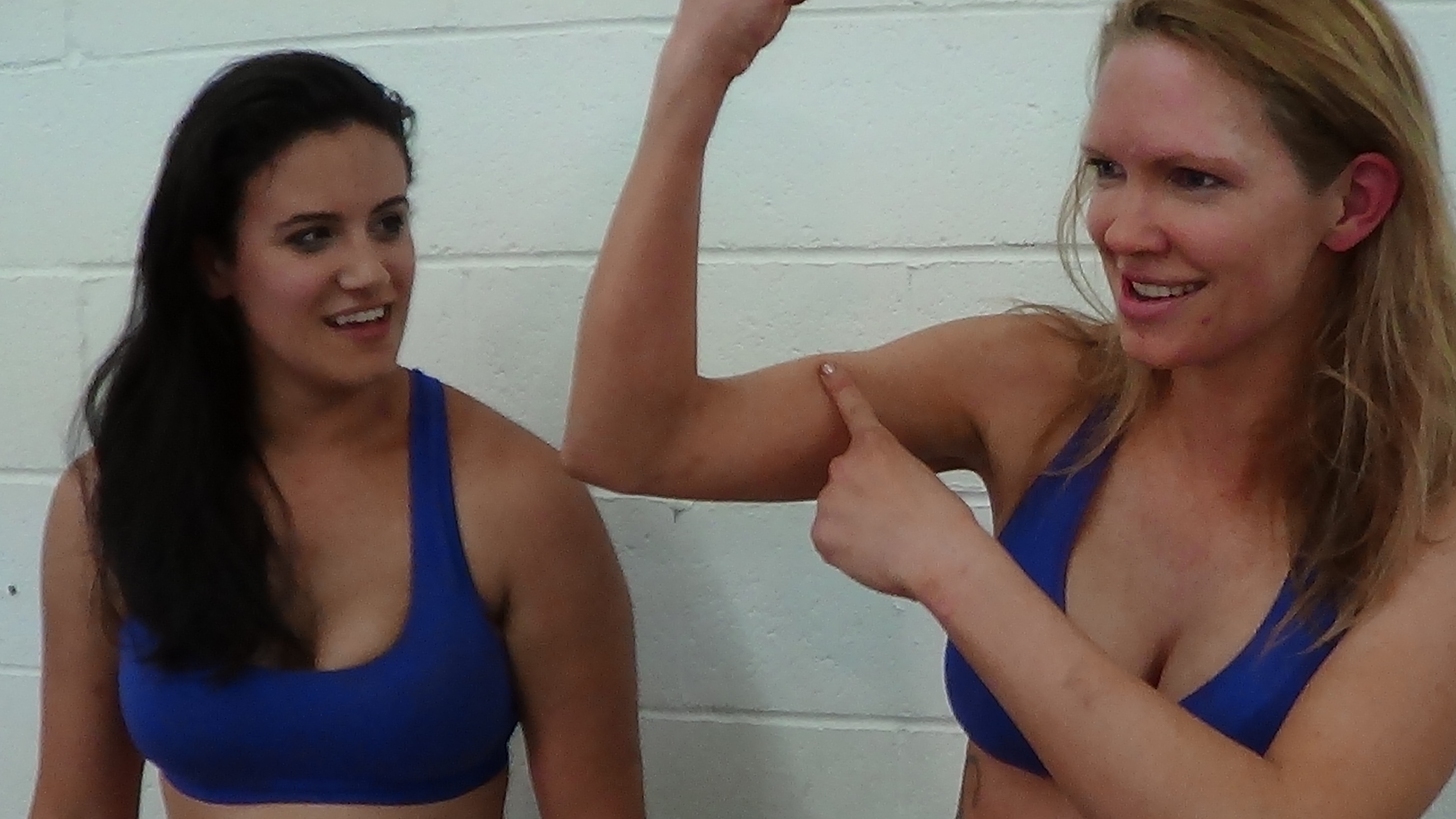