Marie Laverne, a timeless wrestler, made the most of the beautiful gifts given and earned. 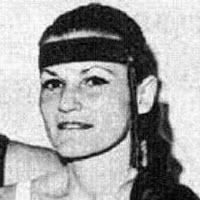 Powder Blue is a magnificent rendering of blue. It’s regal, bright yet understated. It always looked good on the UCLA Bruins football team.

It looked even better on Marie Laverne.

She wore a full powder blue bathing suit in her match against the legendary Vivian Vachon now captured forever on celluloid in the female wrestling cult classic film, Wrestling Queen.

This writer remembers watching her standing in the squared circle when as I suspect according to script; Vivian began berating the referee and gave him a customary bad time. Marie stood there silently, watching the antics while her little boy stood in the corner. She reflected self-control, grace and one very sexy body.

Sexy though she may be, Ms. Laverne could get rough and tumble with the best of her era. Her beautiful long light brown hair would get pulled and sometimes fly all over the place but she stayed in the fight.

Like most female wrestlers, Marie traveled the world including spending some years in England but her place of long time residence was Amarillo Texas where with her husband she raised her son.

Like her contemporary Vivian Vachon, wrestling was in the family and Marie, the daughter of Ann Laverne, is a second generation wrestler following in her mother’s footsteps.

The important information source Wikipedia informs, “Amarillo is the fourteenth most populous city in the state of Texas, also the largest City in the Texas Panhandle, and the seat of Potter County. A portion of the city extends into Randall County. The population was 190,695 at the 2010 census (105,486 in Potter County, and 85,209 in Randall). The Amarillo metropolitan area has an estimated population of 236,113 in four counties.

Amarillo, originally named Oneida, is situated in the Llano Estacado region. The availability of the railroad and freight service provided by the Fort Worth and Denver City Railroad contributed to the city’s growth as a cattle marketing center in the late 19th century.

The city was once the self-proclaimed “Helium Capital of the World” for having one of the country’s most productive helium fields. The city is also known as “The Yellow Rose of Texas” (as the city takes its name from the Spanish word for yellow), and most recently “Rotor City, USA” for its V-22 Osprey hybrid aircraft assembly plant.

Amarillo operates one of the largest meat packing areas in the United States. Pantex, the only nuclear weapons assembly and disassembly facility in the country, is also a major employer. The location of this facility also gave rise to the nickname Bomb City. The attractions Cadillac Ranch and Big Texan Steak Ranch are located adjacent to Interstate 40. U.S. Highway 66 also passed through the city.

The city site visitamarillotx.com shares this information gem that probably few know about or associate with this part of the world. “Driving across the Texas Panhandle one might think this is the last place in the world to find world-class mountain biking. But that viewpoint has changed after former President George W. Bush hosted the Bush Center Warrior 100K Ride in Palo Duro Canyon State Park this spring.

While the stars of the show were the former president and more than 20 Iraq and Afghanistan veterans, the best supporting actor was the canyon itself. Over three days the riders covered 100K of rough mountain bike terrain, including rocky trails that took the riders into the back country of the state park. Everyone was stunned by the canyon’s beauty. Bike riding, including mountain biking on more than 30 miles of trails, is one of the park’s more popular activities, according to Cory Evans, superintendent of Palo Duro Canyon State Park.”

It sounds like Marie found a nice place to enjoy a comfortable family life.

Besides her famous matches with Vivian Vachon some of her other match victories were carved out against the well-known ring veteran Kay Noble, Betty Nicoli who fought the New York State Commission and had their decision to ban women from wrestling in Madison Square Garden over turned and a lengthy struggle with Diane Von Hoffman where Marie finally gained the upper hand. Marie would also do her tour of duty wrestling in the famous Mildred Burke studios.

For all of us, our time periods will come and go and one school of thought and pertinent question is what are you doing as an individual to make it count? What dream do you possess that you have made the sacrifices for to bring forth to the rest of the world?

Many of Marie’s contemporaries have passed away.

According to Wikipedia, Vivian Vachon and her nine-year old daughter Julie died in a car accident on August 24, 1991. They were hit by a drunk driver who had run a stop sign near St. Jean, Quebec. Kay Noble died on April 27, 2006 in Amarillo, Texas due to an inoperable cancer of the stomach, having been diagnosed the previous October. Her funeral was on May 1, 2006. At the time of her death, she also had 20 grandchildren and one great-grandchild.

Marie Laverne was certainly one of the cute girls in the ring during the early 1970s and her beauty alone could have provided her with a very large fan base. She brought forth much more than that. Her ring charisma, athleticism, toughness and showmanship complimented her sensational tan and movie star looks and made virtually every one of her bouts a must see match.

[pullquoteleft] “One secret of success in life is for a man to be ready for his opportunity when it comes.”
……………….Benjamin Disraeli[/pullquoteleft]

If is true that what we do in life echoes an eternity, time periods come and time periods go, and the thinking is not to try and live forever, since none of us do, but instead like Marie Laverne, create something beautiful that does.