[intro] Kait is the epitome of the youthful spirit in women’s submission wrestling.
[/intro] 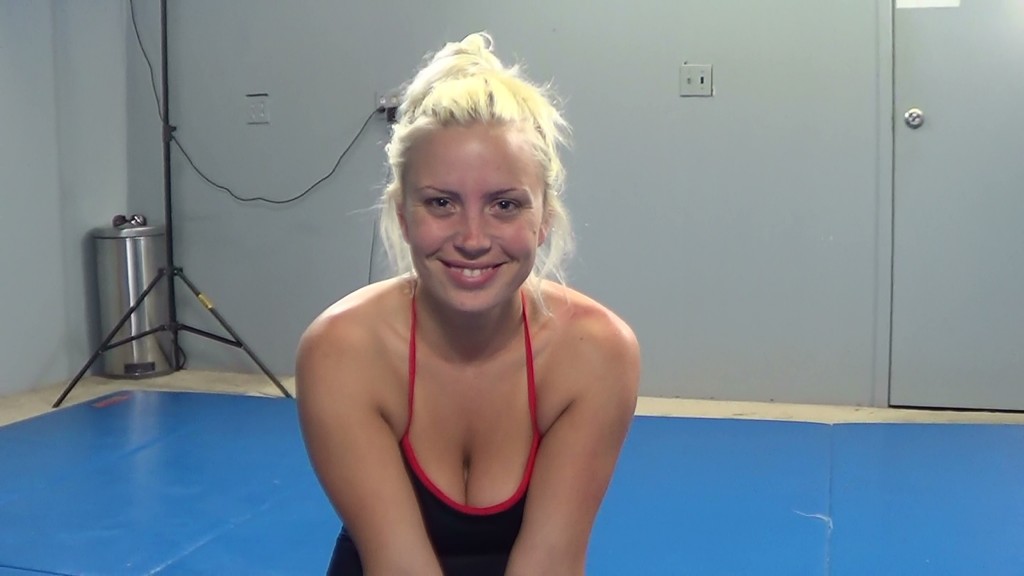 I won’t try and pretend to convince you that I witnessed this first hand but I have visualized it in great detail and compartmentalized it under the heading of guilty pleasure.

She’s driving over the San Francisco Golden Gate or Bay Bridge depending upon my mood. The girlie car in motion is a bright red Volkswagen convertible, newer model, top down and like ribbons flowing off of a fan pointing in one direction, her beautiful blonde hair flows effortlessly under another bright California sun which chose to rise another day. She’s smiling in a dream-like state oblivious to her surroundings with a dazed focus on something slightly pleasurable, not on her want but wish list. Like sparkling blue diamond glass the calm bay area water is her canopy net and softly frames the surrounding islands.

The music varies. It could be Irene Cara’s timeless Flashdance. Possibly Jigsaw’s Sky High. Oh there are a few others. Bananarama’s Cruel Summer, Abba’s Dancing Queen, Gwen Stefani’s Cool and what else? Come on. Help me out here.

Can we settle on Robbie Dupree’s magical Steal Away?

Remember not too slow or too fast. Not sad or harsh. This is guilty pleasure at 70 miles per hour.

When you are young, beautiful, athletic, velvet haired and blonde the world holds endless possibilities. 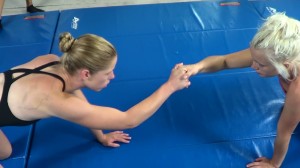 This writer first met Kait at a private women’s submission wrestling company’s video shoot. She would wrestle a novice that day named Poppy (See article fciwomenswrestling.com Poppy Submission Wrestler) and a previous nemesis named Olivia. The scouting report on her was limited, but give her credit, when she was new she defeated a slightly skilled but casual veteran. She now has the possibility of escaping being carefully placed inside the box with high walls reserved for those who only seem to defeat the people they should and never defeat the competitors they are expected not to.

Kait happily spoke with fciwomenswrestling.com before her match with a competitor named Olivia.

FCI: This is your fourth match. You’re getting ready to face a superior opponent compared to your last, how do you get psyched up for that?
Kait: We’ve met before; she has one up on me. We’ll see how it goes.
FCI: Have you seen improvement in your wrestling skills?
Kait: I’ve learned a couple of more moves so it’s all good.
FCI: Where have you learned those moves?
Kait: I’m getting some outside help so that’s been nice. I have friends who teach Jujitsu, one’s a brown belt.
FCI: Very good.
Kait: You always learn something new with each fight. Something that you can correct if needed.
FCI: You tend to be strategic, often fighting from the ground.
Kait: I think fighting from the ground is a good thing with lots of advantages.
FCI: What is your favorite hold?
Kait: I like the choke hold.

She certainly applies it well. We have witnessed her subdue larger opponents after she has captured them in her snare.

Kait fits in nicely with the crop of younger San Francisco, San Jose female submission wrestlers who are continuing to improve in their craft. They would love to wrestle more often if only more private wrestling company’s budgets would allow. Besides the outside training, she has also trained with the San Jose, San Francisco bay area women’s submission wrestling champion Isamar.

As of this May, 2014 writing, Kait fits the profile of the young upwardly mobile go-getters that are attracted to San Francisco for it’s great night life, eclectic culture, bar scene and entrepreneurial opportunities. Twenty years ago the San Jose, Silicon Valley area, south of San Francisco attracted the young with its booming high tech industries but as it matured and went through a bust, there seems to be unique growth opportunities now in San Francisco.

Anyone who doesn’t have a great time in San Francisco is pretty much dead to me.
………Anthony Bourdain

Theories abound but some support for this theory is shared by Steven Grimm in an article he wrote for Forbes.com. “As far as I can tell, the rise of SF is due in large part to the changing demographics of company founding teams. Twenty years ago, a much bigger percentage of companies were being started by people who’d worked in industry for a while and then decided to go off and do their own thing, and they were forming their core teams from other people of similar background. Today, while those people are still starting companies, they are being joined — maybe outnumbered — by much younger entrepreneurs, and they are starting off hiring their cohorts.”

The key to San Francisco’s continuing success as a center for the new talent-based, innovation economy is the outstanding level of educational attainment among its workforce. With over 7,000 college-degree-holders per square mile, San Francisco has the densest clusters of educated workers in the entire United States. Almost three-fourths of San Francisco’s young adult population between 25 and 34 holds a bachelor’s degree, and 95.5% of this demographic holds a high school degree.

Kait also fits the profile of today’s female submission wrestler who has a lot of activities on her plate including being engaged in some self-revenue generation and modeling.

This is an early introduction to Kait, who like San Francisco; you can never visit just once. Keep checking us out. You will see her again. It’s impossible not to be enamored with her down to earth persona, often childlike sweetness and hard work ethic. FCI and the private wrestling company involved are scheduled to work with Kait again who is very professional, keeps her assignments and competes hard.

A rivalry we look forward to features Kait and Olivia from the San Jose area (Please see fciwomenswrestling.com article Olivia-Mom-Wrestler). 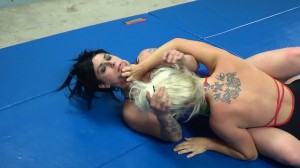 If you ever decide to visit San Francisco, as the late and always great Scott McKenzie sang with the emotional magic that is timeless, be sure to wear some flowers in your hair. Take a risk. Please escape and drive over the Golden Gate or Bay Bridge in a convertible with the top down, music your decision, rental car ideal. Cruise carefully but keep your eyes wide open as there are still so many beautiful sights to see.