June Byers, one of the great female champions of all time gave us a wonderful gift.

Once you’ve crossed into this territory, certain expectations like tumbleweed roll with the terrain.

When you are the champion of the then entire women’s wrestling world, as Ms. June Byers most likely found out, so many people want a piece of your time.

Okay, I’ll help you out with a another clue. They all have the same thing in common with Woody Allen and Boris Karloff. Did that help?

I’ll give you a stronger clue.

June Byers was in such demand that she was invited to appear on the famous TV show “What’s My Line”, where the contestants had to guess her occupation. Besides the fun and laughter what struck me most was the classy way that Ms. Byers handled herself and how elegant and beautiful she looked. A very soft human face was brought to the then questionable world of women’s wrestling. 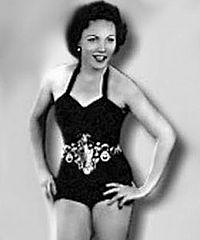 During Ms. Byers reign from 1953 to 1964, the world was a very different place when she began and evolved into a comparatively speaking, barely recognizable one by the time she left in 1964.

1. July 23, 1953: Gentlemen Prefer Blondes starring Marilyn Monroe and Jane Russell was released.
2. August 27, 1953: Roman Holiday starring Gregory Peck and Audrey Hepburn was released by Paramount Pictures. Audrey Hepburn would go on to win an Academy Award for her performance.
3. December, 1953: Hugh Hefner publishes the first issue of Playboy Magazine.
4. January 19, 1953: 71% of all Americans who owned televisions (44 million households) tuned their dials to I Love Lucy to watch the scripted birth of little Ricky in the episode Lucy Goes to the Hospital. As this was the first scripted broadcast of a birth filmed by a celebrity who was actually pregnant in real life, there was much controversy over the appropriateness of the language used in the episode. “Pregnancy” was censored from the airwaves and replaced with the phrase “expecting.”

Are you ready to go back in time? Not so fast. This is what was occurring as well in 1953.

On January 7, 1953: United States President Harry S Truman announced to the world in his final State of the Union Address that the United States had produced its first hydrogen bomb. Truman had previously announced on 31 January 1950 that he gave permission to the Atomic Energy Commission to begin developing such a weapon of mass destruction.

Truman stated: “It is part of my responsibility as Commander-in-Chief of the Armed Forces to see to it that our country is able to defend itself against any possible aggressor. Accordingly, I have directed the Atomic Energy Commission to continue its work on all forms of atomic weapons, including the so called hydrogen or super bomb. Like all other work in the field of atomic weapons, it is being and will be carried forward on a basis consistent with the overall objectives of our program for peace and security.

This we shall continue to do until a satisfactory plan for international control of atomic energy is achieved. We shall also continue to examine all those factors that affect our program for peace and this country, security.”

Here is another piece of troubling news from 1953 that I doubt could happen today.

On June 19, 1953: At the climax of the early Cold War era, Julius and Ethel Rosenberg were executed after being found guilty for treason against the United States of America. The Rosenbergs were famously accused of being spies and providing the Soviet Union with classified information about weapons of mass destruction. They were eventually found guilty of espionage and sentenced to death in a highly controversial case plagued by Red Scare hysteria. Although research has confirmed their corroboration with the Soviet Union, their exact roles (particularly Ethel’s) remain in dispute.

Through it all, June Byers remained one tough champion.

The great Pro Wrestling Hall of Fame site, pwhf.org lays a great foundation for us. “De Alva Evonne Sibley was born in Houston, Texas in 1922. She began her wrestling career in 1944 due to the influence of her uncle “Shorty” Roberts, who was involved with wrestling. She changed her name to June Byers and, like many women wrestlers, it was poverty that inspired her desire to be a successful athlete.

June suffered many defeats in the ring in the early years of her career. The women wrestlers of her era were perhaps the toughest of any female athletes in history. They shared low pay, cheap motel rooms, long car trips and a hardy existence.

The fantastic information site Wikipedia reveals more about one of the all-time female wrestling greats. “Born in Houston, Texas, the tomboyish Sibley grew up around wrestling. Her uncle Shorty Roberts worked for local wrestling promoter Morris Siegel, and as she got older, she often hung around the wrestlers and asked them to teach her their moves. On one occasion while DeAlva was playing around in the ring, the women’s wrestling promoter Billy Wolfe happened to see her and recognized her potential.

That same year Mildred Burke had a bitter falling-out with husband Wolfe and departed the promotion, leaving the world title vacant. On June 14, 1953, a still relatively unknown Byers won a 13-woman tournament in Baltimore to claim the belt. She quickly became a popular fan favorite champion, even appearing as a contestant on the popular game shows What’s My Line? and I’ve Got A Secret on August 16, 1953.”

For those of you who tried to guess what she had in common with some of the greatest entertainers of all time, Wikipedia provided you with the answer. At the top of her game, like the above famous names she appeared on the TV show, “I’ve Got a Secret” as herself.

Let’s travel to the home town of Ms. Byers.

Wikipedia provides us with the BBQ ribs, beans and buttered dinner roll. “Houston is the most populous city in Texas and the fourth most populous city in the United States. According to the 2012 U.S. Census estimates, the city had a population of 2.16 million people within a land area of 599.6 square miles (1,553 km2). Houston is the seat of Harris County, and its metropolitan area is the fifth-most populated in the U.S., with over 6 million people.

Houston’s economy has a broad industrial base in energy, manufacturing, aeronautics, and transportation. It is also leading in health care sectors and building oilfield equipment; only New York City is home to more Fortune 500 headquarters.

The Port of Houston ranks first in the United States in international waterborne tonnage handled and second in total cargo tonnage handled. The city has a population from various ethnic and religious backgrounds and a large and growing international community. It is home to many cultural institutions and exhibits, which attract more than 7 million visitors a year to the Museum District. Houston has an active visual and performing arts scene in the Theater District and offers year-round resident companies in all major performing arts.”

Ms. Byers lived much of her life in a very down to earth yet exciting metropolis.

Wikipedia adds, “As the face of women’s wrestling for the next decade, Byers’s athleticism and technical skills did much to open new markets for women’s wrestling and improve its perception in the eyes of the public as being more than mere tawdry spectacle. Complementing her repertoire of scientific moves was her toughness in an age of very tough women.”

As Ms. Byers reign came to an end in a decade later, the world had so dramatically changed as well. Ms. Byers retired on January 1, 1964.

Here is the new world she walked into.

1. The Ford Motor Company unveils the Mustang at the 1964 New York World’s Fair. That day, Ford takes 22,000 orders for the new car, and the company will make a record-setting 418,812 sales that year.
2. The Port Authority of New York and New Jersey releases designs for the original World Trade Center buildings.
3. President Johnson signs the Civil Rights Act of 1964 into law. The act prohibits discrimination on the basis of race, color, religion, sex or national origin in employment, ends segregation in public places, and outlaws segregation practices common amongst many southern businesses for decades.
4. Betty Friedan’s The Feminine Mystique is released as a paperback, with its first printing selling 1.4 million copies. Friedan’s book ushers in a transformative feminist movement as housewives across America come to identify with the “problem that has no name” and acknowledge dissatisfaction with their domestic roles.
5. In January of 1964 Americans were still reeling from the assassination of President John F. Kennedy on November 22, 1963.

Some things will never change.

Risk takers who fight for their dreams affect us and change the world by bringing us their greatest talent. Play it safe and we’ll never see it. Go forward, gas to the floor and never looking back is an act of love.

June Byers was a risk taker. She didn’t play it safe. She used her grit, determination, athleticism and beauty to change women’s wrestling forever and will always be remembered as one of the legendary triplets. Mildred Burke came before her and the Fabulous Moolah reigned after and given the modern landscape of women’s professional wrestling, we may never see great charismatic long term champions like them again.

Thank you Ms. Byers for your gift.