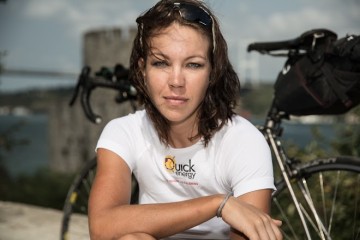 I think if you come first with a new world record, that is the best.
Haile Gebrselassie

Guinness World record holder Juliana Buhring is the first and fastest woman to cycle the globe. Her epic journey took her across four continents and 19 countries in 152 days, racking up 29,065 km (18,060 miles) in the process. The intrepid cyclist was also the sole female competitor in an unsupported race from London to Istanbul in 2013, further demonstrating her record smashing prowess, reports Edition.cnn.com.

Her own website julianabuhring.com conveys in December 2012, Juliana Buhring became the first woman to set the Guinness World Record for Fastest Circumnavigation of the World by Bicycle. Her attempt was almost entirely unsupported, cycling 18,060 miles across four continents and nineteen countries in a total time of 152 days, 144 days of actual pedaling.

Juliana was the sole female to compete in the 2013 Quick Energy Transcontinental Race, Europe’s longest, toughest unsupported bike race from London to Istanbul.

Female Competition International would like to congratulate Ms. Buhring on her unique outstanding accomplishment.

In our continuing quest to chronicle the achievements of interesting female trendsetters and risk takers around the globe, Ms. Buhring certainly fits the description.

Ms. Buhring was born in Greece within the Family of Love cult, previously known as the Children of God, which her British father had joined in the 1970s. The cult’s members engaged in serial child abuse, with Ms. Buhring and her siblings among the victims reports road.cc/content/news.

Her first book, Not Without My Sister, published by HarperCollins in 2007, was an international bestseller making the list in the UK and Ireland for 15 weeks. It was translated into 11 different languages. The book is a partial account of Juliana and her sister’s lives being born and raised in the notorious cultic group Children of God.

In her interview with Independent.co.uk.com, she relates some fascinating experiences one might not expect when undertaking the goal to cycle the globe. Here is a mind tingling extraction.

“I hadn’t got any sponsors, but I did a lot of tweeting and social networking, telling people where I was. So when I told people that I’d ran out of money, many contacted me and said, “Keep going! We’ll keep you on the road.” I had a constant drip of donations from all these people. A lot went wrong, though: my bike broke, I got diarrhea in India and I got attacked by dogs.

I was frequently attacked while riding in Turkey. In some areas, huge dogs roam in packs of 10 to 15, and they chase to kill. There are a lot up in the hills so I’d pray that if they found and chased me I’d be racing downhill rather than uphill. I was saved a few times by cars coming up behind me and deliberately driving into the pursuing dogs.”

Ouch! Things could have gotten ruff.

Italiancyclingjournal.blogspot.com sheds more light on the challenges. Ms. Buhring suffered twenty-nine flat tires, gear/shifter problems, 6 broken spokes, and a broken pedal. There were four serious falls (involving blood and bruises). 70% of the journey was against strong headwinds; between 100 – 160 kmph in New Zealand (No joke, I had to walk, it knocked me over twice and actually lifted Pegasus in the air, bags and all). Crossed 6 mountains, the Australian Nullarbor, got diarrhea and throat infection in India, cycled four days through a cyclone, magpie attacks in Australia and to finish, -9 degrees and snow upon re-entering Italy.

In reporting on record breaking achievements, one of the points of wonder is how are these events verified and documented?

The Telegraph.co.uk.com is very helpful in simplifying the measuring stick. The rules say that a rider must travel the same distance as the circumference of the Earth – 24,900 miles – in one direction, starting and finishing in the same place. Travel by sea and air is allowed, but at least 18,000 miles of the route must be cycled.

The riders are free to use maps and GPS devices to help them navigate their route. They’re also encouraged to stop and get directions from the locals the encounter along the way.

You are not required to have an Adjudicator present when you attempt a record – but if you do not, you must carefully document and record your attempt so our team of Adjudicators can assess the evidence you send to us and verify whether your attempt has been successful.

Should you wish to invite a Guinness World Records Adjudicator, and get immediate confirmation of the outcome of your attempt, you can purchase on-site verification from our range of Adjudication Services.

Guinness World Records performs research before accepting or rejecting any record proposals, which is why getting your record approved may take weeks or months.

What makes Ms. Buhring’s accomplishment more amazing and we imagine satisfying is that this type of monumental undertaking is far more complex and dangerous for a woman than a man.

Safety and lodging issues abound. If you are a male you can take more risks sleeping outdoors which can speed up the stop and go process immensely. If you are a woman, in many parts of the world sleeping outdoors alone is an open invitation for an attack so you continually have to plan for and seek out safe lodging along the seemingly endless trek.

Road.cc/content/news.com shares while there’s no doubt that she is, perhaps surprisingly, the first woman to undertake such a circumnavigation – there have of course been other notable long-distance female cyclists, not least Britain’s own Josie Dew.

Among others known to have circled the globe is another British cyclist, the lateAnne Mustoe, who did so twice, and one of whose books, A Bike Ride, inspired Bristol woman Astrid Domingo Molyneux to do likewise in 2008-10.

A woman who paved the way for all future female cyclists was Beryl Burton from the United Kingdom. Cyclingnews.com informs her name may be unknown to many fans today, but Burton, who rode from the 1950s to the 1980s, is considered to be one of Britain’s greatest athletes ever. Riding always as an amateur, and often working full-time jobs in addition, she won more than 90 national and seven world titles on both the road and the track. The time trial was her specialty, and she won the Road Time Trials Council’s British Best All-Rounder Competition for a stunning 25 consecutive years, from 1959 to 1983. Burton won a total of 72 various national time trial titles, including 28 at the 100 miles distance. She won her last two time trial titles (25 and 50 miles) in 1986, at the age of 49.

Ms. Buhring’s site, www.julianabuhring.com has a video page which includes footage from Italian newspaper La Reppubblica of her arrival in Naples’ Piazza del Plebescito at the end of her record-setting ride. There is also more information about her journey on her World Cycle page on Facebook.

Ms. Buhring set out to cycle the world to raise awareness of her charity Safe Passage Foundation, which aims to help children and young people raised in cults. She also wanted to be known as something other than a cult survivor.