From her early years, Dagmar traveled a wrestling road that would lead to a named destination.

So often in life we travel down alternate roads in every vain attempt to avoid the inevitable. If we are fortunate, the pathway will lead to memorable adventures and across a broad categorical spectrum of family, faith, career, health and finance; satisfying outcomes.

As many of us know, it doesn’t always turn out that way.

In fact, it often doesn’t.

In watching the DWW wrestling star Dagmar in her early years, I wasn’t sure what pathway she was headed down as a competitor. Unlike their modern day contemporaries where competitors often wrestle to drive desires for the more lucrative sessions, the DWW girls seemed to be driven by an interest in wrestling. When we research female wrestlers around the globe, thus far, very few former DWW stars are still wrestling on the side to spark interests in sessions.

When they retire, they actually seem to mean it.

The DWW girls of the late 1990’s and the early 2000 decade certainly had unique personalities but I must admit for this writer when it came to Dagmar it was hard to tell what was on the mysterious brunette’s mind. She was clearly mature yet seemed very childlike and her persona was very quiet and understated. When in competition, she always seemed to speak in whispers with great use of hand gestures. Viewing her DWW profile at DDWgalaxy.com there is some illumination.

Her favorite actor is Tom Hanks.

As a film buff, I have enjoyed watching Tom Hanks in virtually every movie that he has participated in. There is one that stands out among the rest for me and it wasn’t because it was the best. It was because of how it made me feel during the cinematic journey.

We all travel many roads in life and in this film his character was on The Road to Perdition.

The insightful Wikipedia provides the structure of understanding. “Road to Perdition is a 2002 American crime thriller film directed by Sam Mendes. The screenplay was adapted by David Self, from the graphic novel of the same name by Max Allan Collins. The film stars Tom Hanks, Paul Newman (in his final film role), Jude Law, and Daniel Craig. The plot takes place in 1931, during the Great Depression, following a mob enforcer and his son as they seek vengeance against a mobster who murdered the rest of their family. The film explores several themes, including the consequence of violence and father-son relationships.”

When your main dish in life’s course is murder, no matter how well-meaning or deeply admired by others that you might be in distributing justice, that road tends to end up at the same destination that involves two major components; a premature and extremely violent death.

It impacted the famous movie reviewer Roger Ebert as well who in his July 12, 2002 movie review expresses, “It is wonderfully acted. And no movie this year will be more praised for its cinematography; Conrad L. Hall’s work seems certain to win the Academy Award. He creates a limbo of darkness, shadow, night, fearful faces half-seen, cold and snow. His characters stand in downpours, the rain running off the brims of their fedoras and soaking the shoulders of their thick wool overcoats. Their feet must always be cold. The photography creates a visceral chill.”

With many films that I deeply enjoy, I can easily watch them over again sometimes surpassing ten times. With this film, powerful and engrossing as it was, I only needed to see it once but make no mistake about it; I profoundly felt its impact.

When I studied Dagmar’s wrestling, I wondered where she was headed or if she had a plan. So often it’s important to self-design one otherwise you can fall into the trap of following other people’s plans which typically furthers their own interests and if you live major portions of your life with that direction you often reach extremely unsatisfying destinations where it’s clear while others evolved into someone else, life passed you by.

The DWW leadership certainly understood her capabilities. They express, “Dagmar was the technically best wrestler in the 1990s because she was a successful Olympic Style wrestler and a National Champion.” 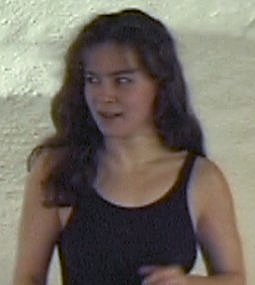 Be that as it may, compared to other DWW stars, Dagmar didn’t seem to compete for an extended period of time. When I look at her DVD list, consistent with my memory, it primarily spans the years of 1999 through 2001. One of her teammates, Edita as an example began wrestling at 18 and continues well into her thirties.

In her tenure Dagmar wrestled some of the best in Petra, Sandra, Eva, Luzia, and Hana. My all-time favorite was her pretzel twisting marathon contest against Hana.

She preferred straight forward wrestling so it was no surprise her favorite dish is a very simple main stay of Austria, Wiener Schnitzel.

Wikipedia informs, “Wiener Schnitzel (Viennese schnitzel) is a very thin, breaded and deep fried schnitzel made from veal. It belongs to the best known specialties of Viennese cuisine.

The designation “Wiener Schnitzel” first appeared in the end of the 19th century, with the first known mention in a cookbook from 1831. In the popular southern German cookbook by Katharina Prato, it was mentioned as eingebröselte Kalbsschnitze. According to a legend, field marshal Joseph Radetzky von Radetz brought the recipe from Italy to Vienna in 1857.”

The tasty site germanfood.about.com adds some seasoning enticing by explaining, “Few foods are more evocative of Austrian cuisine than the humble Wiener Schnitzel, or Viennese Cutlet. As with many simple recipes, the quality of the ingredients is what will make or break your experience with this golden fried treat.”

Derived from a compound of two German words, the historical name Dagmar means Famous or Glorious Day. Given her place in female wrestling history, that is very fitting.

When we travel down unfortunate pathways to towns with names unpleasant, we can only hope we are visiting. Step by step as we traverse the pebble strewn terrain we often know what steps we are taking and where they will lead but seem powerless to detour. Our future towns do have names. Marriage success or relationship breakdown. Sports triumph or athletic failure. Financial security or monetary collapse. Important goal attainment, thus evolving into someone else far more prominent and different than you were in youth or dream failure where you become a ghost who wallows in self-pity and are often viewed as a tragic figure in your circle; a person they feel sympathy for but also do not respect.

One word or two, all of our towns of destinations have names.

Whether it was known to her or not, during her days of competition, through hard work, exceptional training and working with a team of bright minds, Dagmar made the most of her battles on the mats. As a result, she traveled a road that leads to a very special destination where most female wrestlers will never finally reside. In Tom Hank’s film his character’s road led to a place with only one name. Dagmar’s final wrestling resting place has one name as well.

She traveled the road to Permanence.