Cadence could start a new trend. A Punk Rock and wrestling cocktail. 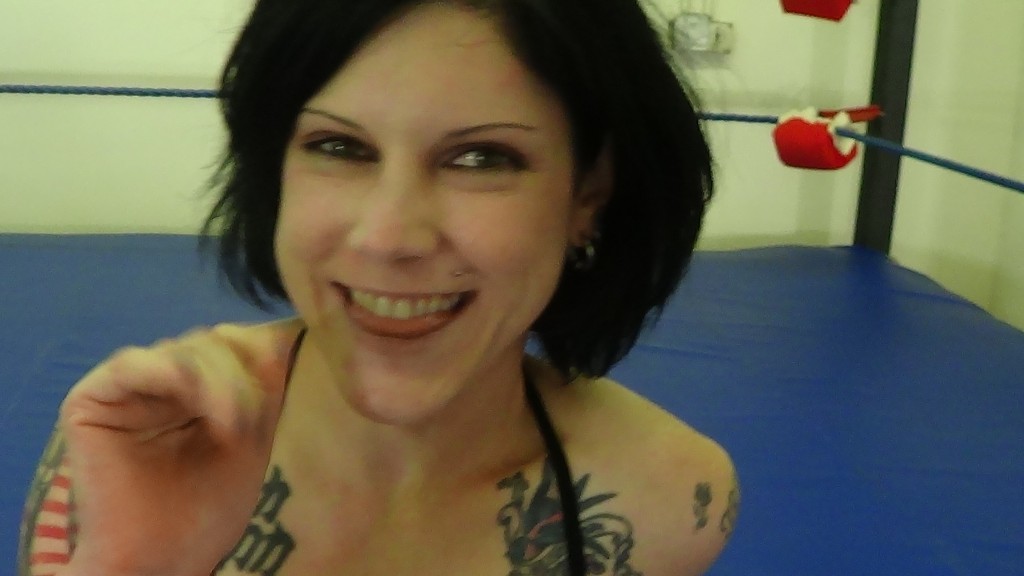 Don’t fear failure so much that you refuse to try new things. The saddest summary of a life contains three descriptions: could have, might have, and should have.
………………..Louis E. Boone

Don’t get too excited.

That’s very different from being willing to try and more importantly “do” anything.

It say’s so on her modeling page at modelmayhem.com. She says this as well.

“I have been a model amongst other things since 2006. I can’t define what type of model I am because I have been involved in so many different types of modeling work. I am definitely not the blonde, tan, fake girl you see everywhere.” 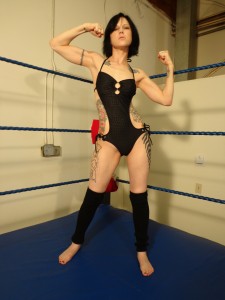 One of our associates traveled from northern California to Canoga Park in southern California to produce a women’s submission wrestling shoot. He lined up four competitors through a recruiter and too his horror, two of the four canceled on Saturday night before an early morning Sunday shoot.

Does anyone have Pepto-Bismol?

What’s a producer to do? Screaming, crying, breaking furniture and pulling out your hair may come to mind and while that behavior may temporarily pacify, it won’t procure additional wrestlers.

You need a hero.

Cadence to the rescue!

To his delight this SoCal cutie agreed to substitute and try wrestling for the first time. At first glance she appeared to be a little too slender and fragile but those fears soon subsided. After viewing five minutes of a match featuring two seasoned competitors in Kimberly and Samantha, when asked if she was intimidated, Cadence replied, “I’m excited still. I’m like, I’m ready; I’m ready! Let’s do this!”

She calls Los Angeles her home and is described as a comely, sexy, and slender 5’7″ brunette.

Cadence was born on September 12. She grew up in the 1980’s. Cadence started out as an alternative model in 2006: She has not only modeled for such websites as Supercult, Hotpunkgirl, and Deviantnation, but also has been featured in various magazines that include Varla, Belle Morte, Tattoo Savage, and Skin and Ink.

Yes indeed, research indicates that Cadence is into the Los Angeles Punk scene. What is that exactly?

I never thought of punk rock as the absolute act of rebellion for the sake of rebellion. There’s a lot of that in there, but for me I think punk rock was always about questioning things and making decisions for yourself, which is a great message to pass on to your kids.
……..Mark Hoppus

In 1978 in Southern California, the first hardcore punk bands arose, including The Middle Class, Black Flag, Vicious Circle, ANTI and the Circle Jerks (in late 1978). Hardcore bands and fans tended to be younger than the art punks of the older LA scene and came mainly from the suburban parts of the Los Angeles area, especially the South Bay and Orange County and San Diego.

This resulted in a rivalry between the older artsy “Hollywood” scene and the hardcore “suburban”, “surf punk”, or “beach punk” scene. Those in the “Hollywood” scene often disliked what they saw as the musical narrowness of hardcore and the violence associated with “suburban” punks (the South Bay and Orange County punk scenes had a particular reputation for violence), while the “suburban” punks looked down on what they perceived as the lack of intensity of older “Hollywood” bands (The Germs being a notable exception with lead singer Darby
Crash) and the fashion consciousness of “Hollywood” punks. The Penelope Spheeris documentary The Decline of Western Civilization, shot in early 1979 and early 1980, documents the period when the older LA punk scene was being completely taken over by hardcore and features performances by bands from both scenes.

A lot of punk rock is not going to be in the mainstream. It’s below the radar. The beauty of it is that you’re not supposed to always know. It’s subterranean.
……………….Billie Joe Armstrong

Another source swide.com expresses, the term Punk was first used in music by American critics in the early 1970s, to describe the sound coming from garage bands and their devotees that were typically short songs with simple instrumentation and based on themes of anti-establishment and the rejection of the mainstream.

Particularly in the U.K., it wasn’t only felt in music, with fashion, art, TV and even food all embracing the ideologies that Punk represented. Front-runners of the movement were soon established and bands on both sides of the Atlantic were recognized as the faces of this new culture; The Ramones and Patti Smith from New York and The Sex Pistols and The Clash in London. These bands channeled their anger and frustration into their lyrics, punching the gloom that they were living in with a new kind of anti-establishment rock, following on from the beginnings of the punk movement that are rooted in local scenes, where garage bands were tackling politics head on and taking no prisoners.

Okay, so this writer is of an older generation and knows punk primarily from mainstream electric sockets. Loved the actor Aiden Quinn playing a bad boy biker in the film “Reckless”, with good girl fresh faced cheerleader blonde Daryl Hannah dancing to Romeo Void’s Never say Never. Yes, I might like you better if we slept together. Loved some of Billy Idol’s mainstream punk inventory even though I suspect it’s like enjoying unsweetened Cheerios in comparison to Punk oats loaded with sugar, honey, caffeine and every artificial ingredient known to man.

Well, maybe because they are a little more like Cadence. You know what we heard?

She liked wrestling as well. She took on two seasoned girls and held her own well. At times she seemed to even hold back a little but expressed that since she used to get into street fights, (very punk like?) here she didn’t want to hurt anyone. She used to wrestle against her brother in times past so she wasn’t at all intimidated. In fact when asked she demonstrated a blood choke on Kimberly and they all agreed, chokes are out.

What often happens to a “new fish” as she is described by Kimberly is that they frequently tire out early. Fully competitive submission wrestling is not like a roll around semi-competitive fantasy. It tends to drain. Cadence never seemed to tire at all.

Cadence went on to have an exceptional day and indicated she was willing to try wrestling again.

Fciwomenswrestling.com fully embraces the idea that women should be willing to try new things. Take a risk as it were. Cadence, a model, exemplifies that spirit.