In many reputable circles, the subject of women’s wrestling is still not taken seriously but it should be.

The previous year the respected site themat.com shared “There were 1,215 girls wrestling teams this season, an increase of 206 teams, for a percentage gain of 20.4 percent.”

In a 2012 article printed in Forbes magazine, we were informed “In recent years, the fastest growth in participation has come from states, such as Hawaii, Texas, California and Washington, that have set up state tournaments for both girls and boys wrestling.” 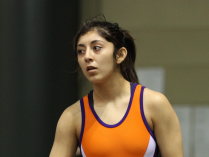 With all of this growth how much acceptance has grown with it?

It’s a subject that could be discussed around the water cooler, maybe not in the fall or winter which is reserved for football but at least once in a while. Dare to do so, even if you don’t get fired out right, if someone in the office has it out for you, it’s possible you’ve just greased the skids.

The Pro Wrestling Hall Of Fame and Museum relates from the 1920’s through the 1980’s, the holy grail of professional wrestling was New York’s Madison Square Garden and everyone in the sport desired to perform at that venue. Unfortunately for women grapplers, New York State’s Athletic Commission Rule 205.15 stated, “No woman may compete in any wrestling or boxing contest or exhibition and no woman may be licensed as a boxer, wrestler, manager or second.”

Ms. Betty Nicoli waged a publicity war with the NYSAC and had articles regarding this unfairness published in newspapers and magazines throughout the country. Residents of New York, Iowa, Georgia, Missouri and all points in-between read of Betty’s struggle and supported her in this battle for equal rights. Betty testified in front of a three-judge panel where she was asked such insulting questions as, “Do you think you’re a man?” Through the combined efforts of Betty and other lady wrestlers of the day, the ban was eventually lifted. Betty never competed in New York State as she did not have nor did she apply for a license.

In a 1970 article written by Will Grimsley he writes, the talented female wrestler Betty Niccoli wanted to wrestle in the great state of New York where the Madison Square Garden resides and fabulous moola could be made. New York flat out said no and would not license women wrestlers. Why not? Women’s wrestling is inclined to incite riots, officials say. Another reason is that women wrestlers are more inclined to get breast cancer.

That was 1970 and as much as attitudes have changed regarding women competing on the mats those of us in the industry know that outside our circle much has not.

In our group we possess college degrees, have worked for newspapers and served as coaches at the most elite high school level. Even still, when we discuss women’s wrestling, freestyle or otherwise, we have been told not to talk about that anymore by family members and some of the parents of our children’s friends stopped associating with us.

And that’s in liberal California.

Maggie Alderson writes for a respected publication The Brisbane Times. Wikipedia informs, Maggie Alderson (born 1959) is a London-born Australian author, magazine editor and fashion journalist. She is the former editor of ES, the Evening Standard magazine (British Society of Magazine Editors, Editor of the Year, Colour Supplements 1989) and British Elle magazines. In Australia, she was acting editor of Cleo and editor of Mode.

In an article that focused on former WWE wrestler Stacy Keibler who sources say dated the well-known actor George Clooney, Ms. Alderson states, “One of the things I’ve always loved about being a journalist is that you learn something new every day. Your consciousness is constantly being expanded with new ideas. Today I wasn’t so sure though, as the new thing I was introduced to was women wrestling”.

She continues, “Wrestling was just ludicrous, and it’s not made any more attractive to me by women doing it. Worse, actually, because it seems to consist mainly of ways for them to thrust their bottoms in the air like baboons on heat.” She eventually concludes by stating, “So I can add women’s wrestling to the list of things I hope my daughter never considers as a career option”.

Sincerely we say thank you to Ms. Alderson. Honesty can be brutal but it’s good to know what reputable people are really thinking when they stop being politically correct.

Female Competition International is determined to influence a cultural shift in regards to societies being more accepting of this great sport. In our extensive research we have found that men overwhelmingly love to watch women wrestle but they tend to do it privately while the wife, girlfriend, daughter or business associate is not in the room.

If we can create a product that allows him to enjoy the sport in front of others, that will be considered major progress. We are already working on that.

Further research indicates women are not heavy consumers of women’s wrestling (no mystery there) but very important is their strong belief that girls and women should have the same rights as men to compete.

That is massive progress from the views of the 1970s.

As of this July 2014 writing, we have already started discussions with corporate sponsors and the need to address the issue of attire influenced our decision to choose a form of innovative volleyball wear while women compete in a Dojo with a goal of a first event by spring of 2015.

In terms of changing the world, the interesting site, galacticconnection.com educates us on the four important traits of people or organizations that do so.

Have a purpose, conviction, vision and take action.